Vauxhall Mokka At A Glance

Honest John Overall Rating
The latest Vauxhall Mokka is a surprisingly desirable choice in the competitive small SUV market. It's not without its flaws, competitors are better to drive – but the Mokka does offer good value for money.

Not as practical as rivals. Four-star Euro NCAP crash-test rating.

The dreary old Vauxhall Mokka has been replaced by a stylish new contender in the small SUV category. Priced upwards of £20,000, the new Mokka is set to tempt buyers away from the Renault Captur, Ford Puma and Skoda Kamiq.

It's based on a new platform, shared with the Citroen C4 and Peugeot 2008. Each have their own distinct style, though, and the Mokka's 'Vizor' design language means there's no chance of it blending in. Not something that could be said about the old model.

The new Mokka looks pretty stylish inside, too, although it's a little bit dependent on which trim level you opt for. SRi models, for example, come with a flat-bottomed, leather-covered steering wheel and alloy pedals, while the high-spec Ultimate Nav features a flash 10-inch navigation system. Launch Edition cars come with a 12-inch digital instrument cluster, too.

Like its peers, the Mokka is offered with petrol, diesel or electric power (the latter badged the Mokka-e). Don't bother with the diesel, unless you're planning to cover mega miles (or perhaps need to tow a small caravan). The 1.2-litre petrol's expected to be the big seller, and it's available with 100PS or 130PS. It's a typical three-cylinder turbocharged petrol unit, more than sprightly enough around town and capable of holding its own on the motorway.

While competitors like the Ford Puma and SEAT Arona are surprisingly agile, the Mokka takes a more laid back, comfortable approach. As such, there's not a great deal of enjoyment to be had in driving it quickly, but its suspension does a commendable job of smoothing over bumpy road surfaces (particularly around town).

It's easy to drive, while there's plenty of safety tech on hand to prevent you from being involved in a crash. Not enough for a five-star Euro NCAP rating, though – a lack of a centre airbag and the autonomous emergency braking system's inability to spot a cyclist were its downfall.

What do owners think of the Vauxhall Mokka? Check out our Owners' Reviews from people who live with the car day in, day out. 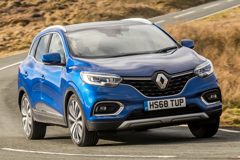 How can I find a car with equivalent spec to my current car?
The best way to find out is to download cars' price lists – Googling "Make Model price list PDF" should come up with the goods – and then compare them side-by-side. I'd suggest looking at cars like the Citroen C3 Aircross, Peugeot 2008 and Vauxhall Mokka. I would expect the Vauxhall to be the cheapest option with your desired specification, but it's unlikely to be cheaper than your old car given the current sky-high prices.
Answered by Russell Campbell
Can you suggest some electric or hybrid SUVs for a £40,000 budget?
We'd recommend a Hyundai Ioniq 5. It's a very comfortable and practical electric SUV with an impressive 238-mile range from the most affordable models. You could also consider the very similar Kia EV6 or the smaller Hyundai Kona Electric. Alternatively, if you rate your current Mokka X, the new Vauxhall Mokka-e is comfortably within budget. If you'd prefer a hybrid model, take a look at the new Hyundai Tucson.

On the inside of an Vauxhall Mokka

Interior Rating
The Vauxhall Mokka isn't as spacious as rivals, nor does it feel particularly plush. You do get a high seating position, though, and the controls are easy to operate.

As is often the case, you'll pay for the Mokka's style when it comes to boot space. It's actually quite compact as far as small SUVs go, which means it's not as practical as a Skoda Kamiq, Nissan Juke or even the Vauxhall Crossland.

Vauxhall quotes a boot space figure of 350 litres, which is below-par in this segment and barely any bigger than a Corsa. There's no trick sliding bench, although a false boot floor is standard across the range. This reduces the lip making it easier to load bulky items, while also giving you somewhere to hide things away securely.

There's plenty of space for front passengers, and you actually sit fairly high up in the Mokka – not something you should take for granted with small SUVs. It's easy to get comfortable, although a lack of adjustable lumbar support isn't ideal for long journeys.

Things aren't so great for rear-seat passengers. Kids will be OK back there (there are Isofix child-seat mounting points on the outer seats), but it feels cramped and claustrophobic for adults.

Only time will tell how well the Mokka's cabin will stand up to family life, but it doesn't feel as plush as a Peugeot 2008. Some of the buttons feel particularly tacky, and there are harsh plastics here and there. It's a bit spec-dependent, though, with pricier models feeling more satisfactory than the most affordable trim levels.

The Mokka comes with two sizes of infotainment screen depending on trim level: seven-inch or 10-inch. Apple CarPlay and Android Auto are standard across the range (a good thing as sat-nav isn't available on all models), as well as DAB radio and Bluetooth connectivity.

We've only sampled the bigger 10-inch display so far and it's adequate, if not top of the class. It's just a bit laggy to use and the graphics leave a little to be desired, although it's simple to operate. We like that there are physical controls for adjusting the volume or tweaking the climate control – it's much easier than having to navigate numerous menus, particularly when driving.

A seven-inch digital instrument cluster is standard across the range, upgraded to a fancier 12-inch display on Ultimate Nav and Launch Edition models. Don't expect Audi's Virtual Cockpit levels of interactivity, but it looks smart enough.

Value for Money Rating
A new Vauxhall Mokka isn't the bargain crossover you might expect, but there are some really good nearly-new deals available. It ought to be affordable on finance, too, while running costs won't break the bank.

You might think of the Vauxhall Mokka as a budget option, but its near-£21,000 start price is significantly pricier than an entry-level Skoda Kamiq or Kia Stonic. Like-for-like, though, it's not that pricey, with even the cheapest models generously equipped. No one pays list price for a Mokka, either, with pre-registered examples already offered for less than £19,000.

A mid-range Vauxhall Mokka Elite Nav starts from around £23,500, while the range tops out closer to £30,000. Anything above that is electric Mokka-e territory.

If you do want a factory order Mokka, Vauxhall is pretty hot on finance deals. These change all the time but, at the time of writing, there are some considerable deposit contributions available, meaning a mid-range Mokka is advertised for around £250 a month with a small customer deposit.

Officially, you can expect to see up to 51.4mpg from the Mokka 1.2-litre petrol, dropping to 47.9mpg with the automatic gearbox. If you really don't like visiting the petrol station, the diesel model is good for up to 65.7mpg. It's probably not worth the extra money in the first place, though, unless you cover a lot of motorway miles.

Annual VED car tax is a flat rate of £155 no matter which model you choose (that'll be the same as rivals unless you opt for a hybrid or electric alternative), while insurance should be fairly reasonable. Insurance groups range from 13E to 19E but shop around for quotes, especially if you're an inexperienced driver.

Driving Rating
Easy and comfortable to drive, the Vauxhall Mokka will be a very pleasant car to live with day to day. If you're looking for excitement, though, you'd be better looking elsewhere.

Don't be intimidated by the Vauxhall Mokka's SUV appearance – it's just as easy as a Corsa hatchback to drive, with good visibility, light steering and plenty of technology on hand to keep you on the straight and narrow.

It's comfortable, with springy suspension on hand to absorb any uneven road surfaces. It does get a little flustered when you hit a pothole at higher speeds, but generally it feels very composed and relaxing to drive.

The steering isn't as direct as a Ford Puma or SEAT Arona's, but there's enough grip on hand to ensure you'll feel safe. There isn't a four-wheel-drive model so, if you expect to traverse muddy campsites, you might be better looking at an alternative like the Dacia Duster.

Looking for a second opinon? Why not read heycar's Vauxhall Mokka review

The Mokka's engine line-up is pleasingly simple. The majority of buyers should opt for the 1.2-litre petrol. This is a typical small turbocharged unit, available with two power outputs: 100PS or 130PS. Both are offered with a six-speed manual gearbox, while the more powerful engine can also be paired with an eight-speed automatic gearbox.

There's also a 1.5-litre diesel on offer, which we're yet to try. With just 110PS and a leisurely 10.8-second 0-60mph time, this is no powerhouse, but it'll be adequate for drivers who want to cover a lot of miles at minimal expense.

Euro NCAP, the independent body responsible for crash testing new cars, gave the Vauxhall Mokka a bit of a slating when it gave it a four-star rating in 2021. "The new Mokka lacks some critical safety systems that have become increasingly commonplace by now," said Euro NCAP's secretary general. "The latest edition clearly lacks the ambition of the previous Mokka that was a runner-up of 2012 Best in Class in the Small Family category.”

Harsh words, but don't dismiss the Mokka just yet. It was marked down for a lack of a centre airbag, as well as the inability of its autonomous emergency braking system to recognise cyclists. Neither of which make the Mokka a fundamentally unsafe car for its occupants.

All models get an automatic emergency city braking system, which can apply the brakes to prevent a collision, while emergency brake assist can increase the amount of braking assistance when required. Hill start assist will prevent you rolling backwards on a hill, while Isofix child seat mounting points are fitted to the outer rear seats.

The Vauxhall Mokka can tow a braked trailer weighing up to 1200kg. That's sufficient for a small trailer or caravan.

The Vauxhall Mokka range kicks off with the SE, which covers all the basics pretty well for an entry-level car. Standard equipment includes a seven-inch colour touchscreen (with Apple CarPlay and Android Auto), 16-inch alloy wheels, climate control and cruise control (with speed limiter). There are LED headlights and tail lights, a lane departure warning system and speed sign recognition.

The Mokka Launch Edition is similarly kitted out to the Ultimate Nav, but with desirable full-leather trim complete with driver's seat massage function.

The updated Mokka range will be available to purchase from April onwards.

What does a Vauxhall Mokka cost? 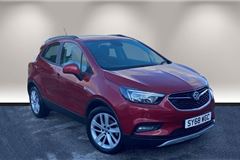 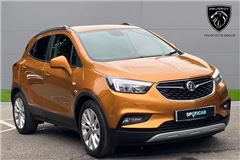 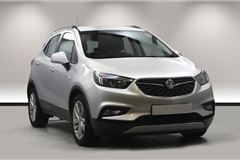