The new Prius retains the established 1.8-litre VVT-i petrol engine featured in the current model, but changes to the unit have taken its thermal efficiency to a world-leading 40 per cent, a figure comparable to a diesel engine.

The auxiliary batteries have been moved from the boot to the engine compartment and the relocation of the hybrid battery beneath the rear seats (see below) also helps free up more luggage space. Boot volume has increased to 502 litres in the new Prius.

The new Prius features a new nickel-metal hydride (NiMH) hybrid battery, considered by Toyota to be the optimum choice to meet market requirements. The battery has been relocated beneath the rear seat, avoiding any intrusion in boot space.

Toyota says it has improved the look and performance of the multi-information display in the driver’s instrument binnacle. Data and images are now presented in full colour with high resolution graphics on a dual, 4.2-inch display. The right-hand section presents speed, fuel level and other basic data and left section is a multi-display where the driver can select preferred content using a switch on the steering wheel.

There is also a new colour head-up display, which projects essential vehicle data and alerts on to the lower section of the windscreen, making information instantly and easily readable without the driver having to taking their eyes off the road ahead.

A new dual-zone air conditioning system is also standard, equipped with a function that detects whether the front passenger seat is occupied and automatically adjusts air vent opening and air flow accordingly, for more efficient and energy-saving operation.

The new Prius is available in seven exterior colours, including Hypersonic Red, a new pearlescent shade that offers extra depth and reflective qualities. The interior is available in Cool Grey or Black, with matching trim and cloth upholstery. Leather seats (Excel grade) are in Cool Grey with black shoulder sections, or Black with contrast blue stitching.

A number of option packs are available for new Prius to add style, protect the cabin and bodywork and provide extra in-car entertainment.

The Parking Pack (£350, Active and Business Edition) equips the car with front and rear parking sensors, while the Protection Pack (£300, all versions), adds front and rear mudflaps, scuff plates, a rear bumper protection plate and a boot liner.

Large-capacity lithium-ion battery, located beneath the loadspace, is key to Prius Plug-in’s 30-mile-plus EV range. Volume has been increased from 87 to 145 litres and energy capacity doubled from 4.4 to 8.8kW/h, yet at 120kg it is only 50% heavier than the none plug in battery.

EV power has been increased by 83 per cent, thanks to the development of a Dual Motor Drive System. A new, highly compact clutch within the transaxle allows the hybrid system generator to act as a second electric motor. This boosts EV driving power to 68kW, giving better acceleration and even more engaging performance, while at the same reducing the frequency with which the petrol hybrid engine is brought into play.

The revised prices shown are after the Government grant of £2,500.

There are some equipment changes for the 2018 Prius, the latest generation of Toyota’s pathfinding hybrid electric car. Automatic wipers have been made a standard feature on all versions apart from Active grade, and all new Prius now come with a leather-trimmed steering wheel. Active and Business Edition have a new-style 15-inch alloy wheel, which can also be specified as an option for Business Edition Plus and Excel grade models in place of the 17-inch wheels. Finally, Autumn Silver has been added to Prius’s colour palette.

The new fuel consumption and emissions figures are shown below. 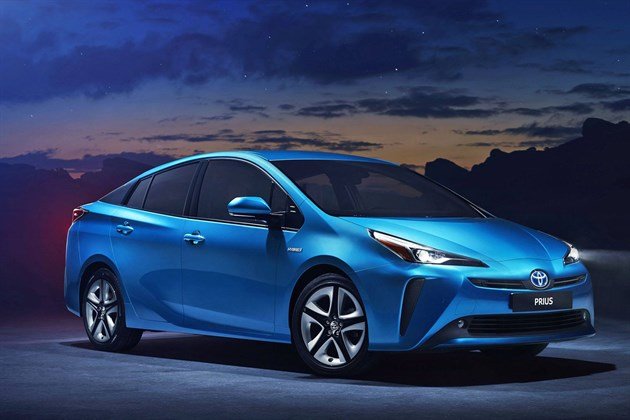 Hybrid AWD-i, a new, intelligent, electric all-wheel drive system that provides more sure-footed handling and peace-of-mind driving. The system uses an additional high-torque electric motor to provide extra drive through the rear axle when required. It is engineered to engage automatically when pulling away, at speeds up to 7mph, and when sensors detect low-grip conditions, such as snow or wet and slippery road surfaces, at speeds between 7mph and 44mph. The unit is compact and lightweight, with no centre differential or front-to-rear driveshaft, so there is minimal intrusion in boot space and little compromise in Prius’s fuel economy and low emissions.

Styling changes to the 2019 Prius give the car a cleaner look. Sharp, slim new headlight units feature new bi-beam LEDs that give a wider field of illumination. The peak point of the bumper has been raised to generate a coherent, flowing line down the sides of the car. At the rear, new combination lamps replace the weird vertical lights of the 2016 Prius, directing the eye to a strong horizontal line to emphasise the car’s low centre of gravity and are fitted with new-design light guides. A new inverted trapezoid shape is integrated in the tailgate around the licence plate. The 2019 changes include the addition of two strong new colours: Emotional Red and Aqua Breeze, a new 17-inch alloy wheel design and a new contrast dark grey finish for the 15-inch wheel trims.

In the cabin there are changes to the centre console and some of the controls on the instrument panel. New cloth upholstery finishes have been introduced making a smarter and more refined interior. Changes to the equipment include an increase in size for the wireless charging tray to accommodate larger smartphones; turn-by-turn navigation directions added to the head-up display; and a multimedia Toyota Touch 2 touchscreen that offers faster response and can be operated using “pinch and flick” gestures familiar from smartphone use. 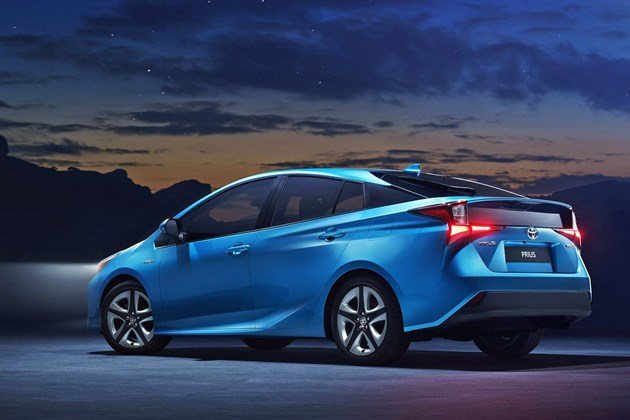 Toypta 5 year warranties can now be extended to 7 years for £495, including MoTs and Toyota Roadside Assistance.