Infiniti has struggled to make an impact in the UK. The luxury brand from Nissan was billed as a rival to Lexus, but has so far failed to ignite much interest. Show the average person on the street a picture of an Infiniti and they're unlikely to recognise it.

Not that Infiniti is aiming to be a mainstream brand - it's happy to carve out a niche - but even then it needs to sell cars, especially here in the UK. And the new Q50, a BMW 3 Series size saloon, is the first step in a plan that will see the Infinti range more than doubled in the next five years with twice the number of engines available.

Given that Infiniti wants to make more of an impact, it's somewhat of a surprise that the Q50 is fairly generic in its design. There's more than a touch of Lexus at the front while the back is reminiscent of the latest Mazda6. The brand claims that it wants to be different from other premium brands when it comes to styling, but the Q50 is inoffensively ordinary.

In terms of price, the Q50S Hybrid is £40,000 - around the same as a BMW ActiveHybrid 3 - and it comes well equipped as you'd expect with pretty much every bell and whistle you'd want. Opting for the all-wheel drive model adds a further £1625.

The 2.2d on the other hand starts at £27,950 - slightly cheaper than an equivalent Audi A4 and considerably less than a Mercedes-Benz E-Class with the identical engine. The Q50 is a decent effort by Infiniti and certainly an improvement on the G saloon it replaces, but there's little that makes it stand out and nothing to really recommend it over a competitor car.

The Infiniti is fairly ordinary inside. There's no doubting the quality nor the attention to detail in the finish, but it lacks personality. The new touchscreen control - called InTouch - is good though and works like a smartphone with a similar controls and the ability to download apps. You can even get your emails on the move thanks to a text-to-speech function and sync with your Google calendar.

However, elsewhere there are no special touches or neat features that mark the Q50 out from competition. It certainly doesn't feel particularly modern or stylish, especially if you compare it to the latest Lexus IS. On the plus side it does have impressively comfortable seats - designed using NASA research - and plenty of space, although taller passengers in the back will find their head brushing the rooflining.

The G saloon was hampered by the lack of a diesel engine, but Infiniti isn't making the same mistake with the Q50 - it comes with a new 2.2-litre diesel engine. Well we say new, it's actually a Mercedes-Benz unit that's used across a wide range of models from the SLK to the M-Class. In the Infiniti it develops 170PS, but more impressively has 400Nm of torque which peaks from just 1600rpm.

In theory this should mean strong performance and while it's not sluggish, it's not a refined or quiet engine, so utilising that power is far from a pleasant experience. Compared to similar sized diesel engines from Audi, BMW and Jaguar, it seems coarse. We only had the opportunity to drive it with the optional seven-speed automatic rather than the standard six-speed manual. While the auto offers reasonably smooth changes, it doesn't shift gears very quickly meaning the overall driving experience often feels strained.

The one thing the 2.2d has going for it is economy. It averages a claimed 64.2mpg with the manual gearbox, which means emissions of just 114g/km - impressive figures for a car this size. The other model in the Q50 range is the Hybrid, which is available with four-wheel drive. Powered by a 3.5-litre V6 petrol engine combined with an electric motor, it's the quickest mainstream hybrid on the market, managing 0-62mph in just 5.1 seconds.

It's the same hybrid system that's used in the M35h, but the seven-speed automatic gearbox has been tuned to improve performance. As a result it's a very different hybrid than we've become used to. There's no CVT gearbox so you don't get that odd continuous whine whenever you accelerate. Instead it sounds genuinely sporty with a nice exhaust note and a strong V6 sound. It doesn't feel quite as quick as the figures suggest, but it's certainly no slouch. The advantages of the hybrid system are also evident in economy - a claimed 45.6mpg with CO2 of 144g/km from a car with more than 360PS.

The Q50S Hybrid also comes with Direct Adaptive Steering - the world's first electronic steer-by-wire technology. That means there's no physical connection between the steering wheel and the steering rack (although there is a traditional column in place as a safety back-up in case the system fails). The theory behind it is that by getting rid of the mechanical losses in a conventional system, the steering response is faster and vibration at the steering wheel is made non-existent.

It sounds clever but what's it like in practice? Well, it's better than the standard steering system on the 2.2d which lacks feel and response. With the Direct Adaptive Steering you can alter both the weight of the steering and the responsiveness from light and casual to heavy and direct. In the latter it feels mighty strange for a saloon and is almost too direct.

Opt for an in the middle setting and it's better, although it still feels very artificial and doesn't imbue you with the same confidence in corners as rival saloons. It's an interesting system to play with but you do question why they can't just make the standard steering set-up good in the first place, maybe with a sport setting to add response. In short it seems over complicated.

The first Infiniti to feature technology developed specifically for Europe rather than for the USA, the result of a partnership with Daimler.

The Q50 heralds in a new naming system for all Infinitis: Q for saloons and coupes and QX for crossovers and SUVs. Four and six-cylinder diesel engines , hybrid powertrains, pure electric drive systems.

The Infiniti Q50 made its European debut in 364PS 3.5 Hybrid and 2.2-litre diesel form. That's Infiniti’s first four-cylinder diesel with 170PS, 400Nm of torque and emissions starting from below 115g/km of CO2.

The Q50s on the stand showcased Infiniti’s exclusive new 'Hagane' colours and show a variety of the features that will be available across the Q50 range – designed to appeal to company and private buyers alike.

Halo model Infiniti Q50 3.5-litre, 364PS Direct Response Hybrid gets from 0-62mph in only 5.3 seconds, emitting 155g/km of CO2. Has direct application of electric boost to drivetrain via an innovative twin clutch system. The Q50 Hybrid starts from £40,000.

Infiniti has confirmed that it will tailor its Q50 for company car drivers with the launch of the Executive edition. Specifically created for business users, the Executive gets a 2.2-litre four-cylinder diesel engine and two trim levels - Executive and Premium Executive – with the later featuring satellite navigation, heated leather seats and keyless entry as standard. Deliveries start in November and prices start at £29,870.

The new engine is the result of Infiniti’s collaboration agreement with Daimler AG. As with the 2.2-litre direct-injection four-cylinder turbo-diesel engine destined for Europe, the petrol version has been modified by the Infiniti engineering teams to ensure engine response is in line with Infiniti’s brand characteristics.

13-01-2014: Q50 Eau Rouge concept unveiled Named after the famous climb at the Spa-Francorchamps circuit in Belgium, the concept has been infused with spirit of Formula One, according to Infiniti. The firm is the main sponsor of Red Bull Racing. As a result it gets a turbocharged version of Infiniti's 3.7-litre V6 engine delivering 500PS

Along with a lower ride height and wider track, the Q50 Eau Rouge also has bespoke carbon fibre bodywork. In fact only the front doors and arch of the roof pillars are the same as the standard Q50. There are large front and rear wings while a larger rear spoiler creates downforce. The grille comes in dark chrome with a matte finish while the bonnet has double air vents. The concept is fitted with 21-inch alloys.

Inside, the Eau Rouge has a high-grip sports steering wheel with paddle shifters along with red detailed carbon fibre detailing on the doors and centre console. Dark-chrome replaces silver-chrome in the red cockpit.

Prices start from £31,755 for the 2.0-litre petrol version of the Q50. The turbocharged four-cylinder engine develops 211PS and 350Nm of torque which powers the rear wheels through a seven-speed automatic gearbox.

Making its debut on an Infiniti is the company’s second-generation Direct Adaptive Steering, comprehensively modified from the ground-breaking first-generation system. The standard steering mode now offers advanced levels of steering feel and feedback – more akin to that of a conventional steering system.

The new Q50 also features Infiniti’s Dynamic Digital Suspension (DDS) for the first time, which gives the sports saloon an optimal blend of ride comfort and class-leading response and agility. For those drivers looking for a blend of dynamic settings tailored to their own particular requirements and tastes, the Q50’s Drive Mode Selector (DMS) can be augmented with a ‘Personal’ mode, which permits a bespoke mix of engine, suspension and steering characteristics.

Five powertrain options are offered with the Infiniti Q50, and for the 2016 model these include an advanced, all-new 3.0-litre V6 twin-turbo gasoline engine with direct injection. This new engine has 400PS. 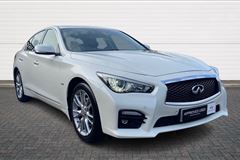