Not as good to drive as its rivals. Ride is blighted by lots road and engine noise. Load area small for an SUV of this size. Satnav can be years out of date and not updatable.

The Jeep Cherokee has been absent from UK shores since 2011 but it's fair to see it didn't exactly leave a big hole in the market. Now the Cherokee is back and Jeep has high hopes for its new SUV which marks the beginning of a reinvigoration for the brand now owned by Fiat.

2013 saw a much improved Grand Cherokee launched and there's also a smaller SUV, the Renegade, which has created plenty of interest.

For the new Cherokee, Jeep is moving things more upmarket. It has realised it cannot merely trade on its rugged and outdoorsy image as it once did, so it's no surprise to see big improvements from previous Jeep models in terms of quality and design.

The new Cherokee is certainly distinctive, especially from the front with that odd nose but some things continue like the traditional Jeep grille, albeit with a new take on the old design.

The engine line up consists of a 2.0-litre MultiJet II diesel delivering 170PS, mated to a nine-speed automatic gearbox. There will also be a 140PS version of the 2.0 unit, which will be offered with a six-speed manual gearbox.

As an alternative to SUVs like the CR-V, the Jeep has plenty going for it. Not least a strong image and a genuine off-road capability. Like all Jeep models, the Cherokee can cover proper tough terrain. This is no weekend soft-roader.

Of course whether owners really want that is another matter and for those that do the Land Rover Freelander, although now several years old, still holds plenty of appeal. But you can expect plenty of standard kit with the Cherokee and it's certainly a big step in the right direction for the brand.

What do owners think of the Jeep Cherokee (2014 – 2019)? Check out our Owners' Reviews from people who live with the car day in, day out.

Comfortable to drive with a robust interior, good engines, popularity means lots of choice on the used...

Water is leaking into the footwells of my car - what's causing it?
It is most likely a blocked bulkhead vent well drains that leave rainwater nowhere to go except via the pollen filter into the cabin of the car. Pop the bonnet and have a look under the grille at the base of the windscreen. The drains are either side.
Answered by Honest John
4x4 suggestions?
A Jeep Cherokee is a much more capable off roader and is narrower than a Q5. But a Q5 is a much better trimmed vehicle that carries far more status. But benefit from fitting either winter tyres or the new compromise all weather tyres such as Michelin CrossClimate or Nokian Weatherproof.
Answered by Honest John
More Questions

It's not the most handsome of SUVs but it certainly stands out. It's a shame therefore that the interior isn't as daring. It's a fairly traditional and conservative design but on the plus side it gets all the basics right.

The controls are all intuitive and well located while the Uconnect system which was first seen on the Grand Cherokee is an excellent media system which is simple to use and has a lovely crisp display. Other manufacturers could learn a lot here.

Quality and finish is an area Jeep has focussed on with the new Cherokee and it's certainly better than Jeep offerings of the past, although that's hardly saying much. It feels a well built car inside with good perceived quality helped by the soft touch materials on the dash and a good quality leather steering wheel.

It's not quite up to premium car standards, the door inners have a fair bit of flex in them and it doesn't feel particularly special or stylish, but it's solid nonetheless.

The Jeep uses a Fiat-sourced 2.0-litre MultiJet II common rail diesel that comes in two versions. There's a lower powered 140PS model with a manual gearbox that's available in either two or four-wheel drive, or a top 170PS version that comes with an automatic gearbox as standard.

A more off-road version called Trailhawk, which is powered by a 3.2-litre V6 petrol, will be available but in very limited numbers in the UK as a 'special order' version.

Neither diesel model is especially quiet on start-up or when pressed into hard work, but in every day driving the four-cylinder diesel is refined enough as to not be obtrusive. It pulls well with both versions delivering 350Nm of torque from low down so there's no reason to really work the engine hard. The 140PS version is good enough and rarely feels sluggish while the six-speed manual gearbox offers reasonably positive changes.

The more powerful 170PS engine would be our choice but mainly because it's the only one that comes with the automatic gearbox. This new nine-speed auto may seem to have an excessive number of gears, but it works particularly well with the MultiJet II diesel with swift yet smooth changes. It avoids the often common problem of hunting for the right gear at town speeds and is responsive when you ask it to kickdown.

Most people buying an SUV of this size prefer the convenience of an automatic and the Jeep version is one of the better gearboxes around. It's pretty good on fuel too with an official average of 48.7mpg and emissions of 154g/km. The two-wheel drive 140PS is the most frugal with a claimed 53.3mpg and CO2 of 139g/km.

When it comes to handling Jeep has really upped its game with the new Cherokee. Jeep handling has traditional been of the soft and soggy variety but the Cherokee is impressive for an SUV with good body control and responsive steering, albeit with an artificial feel.

It's strong in corners and gives you plenty of confidence – not something you could say of Jeep models in the past. The ride quality is reasonable good too, although it is a touch noisy over rough roads, but at motorway speeds the Cherokee is pretty serene with very little wind noise.

Complaint that new Jeep Cherokee Limited 2.2 Multijet purchased in September 2015 is not actually suitale for skiing in the Alps. Purchaser was explicit with the sales team and dealership that he would be using the vehicle to go on a ski-ing vacation in February 2016. He had been attracted to the Renegade "designed" by a snowboarder and the Jeep image as an outdoor, rugged SUV brand. He subsequently learned that the Jeep is sold with standard 3 season tyres, and has a standard wheel that is not chainable and hence the vehicle is almost useless in snow unless bought on a set of winter tyres.

Complaint from reader who bought a used 2018 Jeep Cherokee only to find that its satnav contained 2016 mapping and that this could not be updated, suggesting that the car was actually a late registered 2016 and not 2018 build.

The all-new Jeep Cherokee is powered by the efficient 2.0-litre MultiJet II turbo diesel engine in combination with the new nine-speed automatic transmission. The new generation Jeep Cherokee is now available in both two-wheel drive and four-wheel drive configurations, offering a choice of two new, sophisticated Jeep four-wheel-drive systems in order to ensure benchmark off-road capabilities under all driving conditions.

The new Jeep Cherokee will be introduced in UK Jeep dealerships in the second quarter of 2014, in the Longitude and Limited trim levels. The engine offer comprises the efficient 2.0-litre MultiJet II turbo diesel delivering 170PS. This engine will be matched with the new nine-speed automatic gearbox, which is used for the first time in the mid-size SUV segment. A 140PS version of the 2.0-litre engine will also be available in combination with a six-speed manual transmission.

Throughout the cabin, customers will find interior trim that is soft to the touch and pleasing to the eye. A vinyl-wrapped, stitched instrument panel brow is standard on all models and the stitching carries over to the centre console armrest and front door armrests. The new Jeep Cherokee is available with three interior trim choices inspired from exotic locations and landscapes around the world, such as Morocco, Grand Canyon and the Italian Mount Vesuvio. 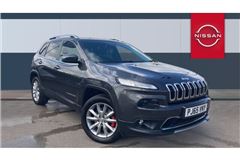 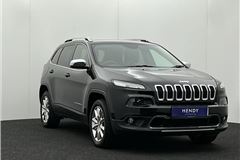