Twizy’s battery fully charges in just three and a half hours using a domestic electrical supply via a spiral cable stowed behind a flap at the front. Twizy’s low weight (450kg, including the 100kg battery) directly helps its operational range of 62 miles (NEDC standard cycle). In everyday use, this figure can vary depending on driving conditions.

Pricing and specification confirmed for the third Twizy trim level, Colour. Twizy is a production reality, launching in the UK in April 2012, priced from £6,690 and monthly battery hire from £40.

The new Colour version will sit between the previously announced trim levels, Urban and Technic, priced at £6,950 on-the-road. Its pricing sees it pitched at £260 more than the entry-level Urban and £450 less than the top-of-the-range Technic.

Emphasising Twizy's fun side, Colour comes with white bodywork and a choice of Urban Blue, Ivy Green or Flame Orange panels for the roof and sides. Black bodywork is also available with orange panels for an even more striking look.

The same hues are continued through to its upholstery and glovebox and can even be specified on colour-coordinated, diamond-effect alloy wheels which cost £350. Colour-coordinated half-scissor doors will be available for £455, mirroring its affordable price positioning.

Standard equipment on Twizy includes 13-inch wheels, two gloveboxes, one of which is lockable, 3 metre long charging cable, heated tinted windscreen, Z.E. onboard computer and dashboard with econometer and battery consumption display. Safety and security have also been paramount throughout the project, as is evident from the three-point seatbelt in the front with additional lateral restraint, three-point seatbelt in the rear, front airbag and immobiliser and steering lock.

Renault Twizy two-seater began showroom launch, priced from £6,690 OTR. Battery hire from £45 per month (based on 4,500 per miles per year/3 year contract). It is available in three trim levels: Urban, Colour and Technic. Options include scissor doors (£545) and metallic paint £195. Wide range of accessories includes child booster seat £55, driver and passenger blanket £110, 50-litre leisure bag £95 and alloy wheels £340. All prices include VAT. Lower powered (5hp) and cheaper Twizy 45 could come to the UK in January 2013, for drivers aged 16 and over, without the need for full driving licence, based on new **European AM category for mopeds and light quadricycles. 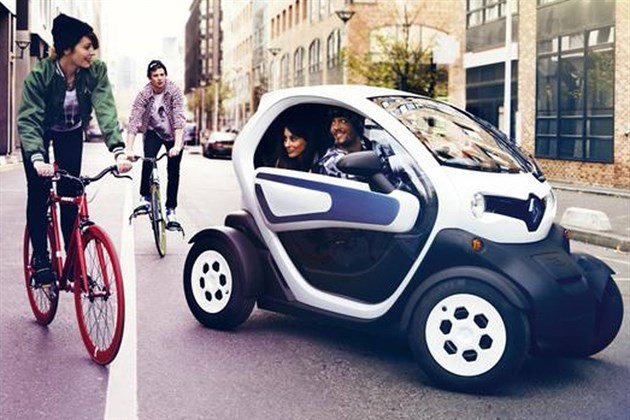 4kW motor and limited to 45kmh, but under 'quadricycle' rules can be driven by kids from age 14.

Twizy Expression replaces the former Urban version and Twizy Dynamique replaces Technic, while the Cargo remains unchanged. There have been minor changes to colours, trims and wheels.

Dynamique supplements this with 13-inch Diamond alloy wheels in Gloss Black, Flame Orange or Urban Blue and a choice of 14 two-tone colour collections for the wheel arches, seat covers and mirror housings.

The Cargo version of Twizy dispenses with the rear seat, expanding the carrying capacity to 180 litres with a lockable storage area – sufficient for commercial applications such as urban area deliveries or for carrying equipment or tools.

TWIZY PRICING (On The Road)

The warranty applies to all new Renault cars registered from 18th December 2019 both retail and fleet cars and features an unlimited mileage limit during the first two years and up to 100,000 miles up to 5 years old.

Back: Introduction Next: Specifications