Only available through the Specialist Products Division at Mercedes-Benz World at Brooklands in Surrey. High list prices. Not designed for corners. The G-Class is actually the longest serving passenger model in the Mercedes-Benz range and after a ten year absence from the UK it's now back. Not that you could miss it. The functional boxy design has remained pretty unchanged since the G-Class first came along in 1979 although the current version is anything but basic - it's now a luxurious, highly-specificied and technological advanced 4x4.

And that's what sets the G-Class apart from most modern SUVs. This is a vehicle that first and foremost is designed for off-roading. The G stands for Geländewagen - or cross-country vehicle - and it's pretty much unstoppable on nearly every terrain. It feels bomb-proof with the kind of build quality that made Mercedes-Benz the brand it is today. And when it comes to road presence, nothing else can touch it - this is a car people certainly give way to.

It feels a very special vehicle from behind the wheel. Much of this is down to the hand-built nature of the G-Class’ construction. To ensure it can withstand even the harshest driving conditions its chassis is injected with 50 litres of corrosion-repelling wax while the bodywork is welded at over 6000 points to be incredibly robust. Each G-Class model takes just over 40 hours to produce, with daily production limited to just 15 models per day.

There are two models in the G-Class line-up. The most obvious is the G350 CDI diesel which has 210PS and averages a claimed 25.7mpg but if you really want to go all out there's the utterly bonkers AMG version with more than 540PS and a 0-62mph time of 5.4 seconds - and remember this is a vehicle that weighs in at 2.2 tonnes. There is also a commercial version - the G300 CDI Professional and like the standard versions it's a five-door long-wheelbase format.

On the road the G-Class feels as big as it looks. It's cumbersome and awful in bends while the steering requires plenty of turns in tight corners. But when the going gets tricky, the G-Class excels and still feels very much the luxury and refined 4x4, even when you're tackling huge rocks or deep ruts. It's happy on the motorway too with surprisingly little wind noise.

When the G-Class came along in 1979, its interior had a no-nonsense design and this continues today. There's no superfluous design or style over substance, this is a car developed for a purpose. That's not to say there's no luxury - far from it - the G-Class is as upmarket as you'd expect of a top of the range Mercedes-Benz with leather upholstery, great seats and rock-solid build quality.

The flat dash design and passenger-side grab handle are bespoke G-Class features while the main features such as the steering wheel, instrument dials and air conditioning controls are taken from the previous generation E-Class.

The COMAND multimedia system features a seven-inch colour display along with a pan-European navigation system, stored on a large 40-gigabyte hard drive for quick route calculations.

It's not the best system around for ease of use and some functions aren't as intuitive as they are on systems from the likes of Audi and especially BMW. The stereo function is a little frustrating too and while it looks good with a retro style tuner display, it's not always that straightforward to use.

On the plus side it does come with a media interface system as standard which lets you connect audio devices – including iPods, USB memory sticks or MP3 players - through the stereo.

The G-Class has a top quality Harman/Kardon stereo with surround-sound as standard and it includes a 450 Watt multi-channel amplifier powering 11 high-end loudspeakers and a sub-woofer. What that means is it's loud - very loud!

Elsewhere, the G-Class has heated leather seats which are electronically adjustable. There's a good amount of room for the driver with lots of adjustment in the steering wheel. The only gripe is the high brake pedal. Taller drivers will find their ankle starts to ache as you continually have to lift from the throttle across to the brake, which becomes tiring especially in traffic or when driving in town.

Those in the back will be happy with masses of legroom and - thanks to the square shape - superb head space. The boot is big too with 490 litres of carrying capacity while the high square sides mean you can carry large items with no problems. The lack of a boot lip helps. The only thing you have to remember is that the tailgate is hinged at the side so you need to leave room when parking close to walls or other cars.

The sheer size and bulk of the G-Class means it feels as big as it looks. And this is a unique looking car. It feels invincible on the road and has such presence, especially if you specify it in black with privacy glass.

This is once car that gets noticed wherever you go and climbing up behind the wheel always puts a smile on your face. From the big heavy doors with the push button handles to the indicators plonked on top of the bonnet, the G-Class really is a very special vehicle.

As it's built for off-road driving, you won't be surprised to hear that it's pretty much unstoppable in tough conditions. It's tank-like in its ability to cover rough terrain at a good pace without ever feeling like it's going to get stuck.

It has permanent four-wheel drive, complete with off-road ratios and is one of very few vehicles to have 100 per cent locking differentials front, centre and rear, which are controlled by three switches on the dash.

The big Mercedes is also fitted with the 4ETS Electronic Traction System and ESP calibrated specifically for both on and off-road use. The system constantly monitors the speeds of the individual wheels and if one or more wheels lose grip, the wheels are independently braked and engine torque is temporarily reduced to correct the loss of traction.

No surprise then that the G-Class has legendary status among off-road enthusiasts that is probably only matched by the (not as luxurious) Land Rover Defender.

If you need more proof, the military version of the G-Class is used by 63 armies around the world, including the German Armed Forces, Canadian Army and US Marine Corps, plus Mercedes-Benz has guaranteed production of the G-Class for NATO up until 2025. It can tow up to 3500kg and with ground clearance of 290mm could probably cross The Channel pulling a small house.

The bodyshell is immensely stiff and it shows on the road. It's clear this is a vehicle primarily designed for off-road driving with a stiff and bouncy ride and slow steering - good for low speed manouevres but awful through corners.

That said the low centre of gravity and permanent four-wheel drive mean traction is immense but the large 265/60 tyres with their thick tread make tackling bends an 'experience'. The steering often requires more input than you'd expect and you certainly have to concentrate, slowing down considerably more than you would in an SUV like the ML-Class. As a result, driving the G-Class is rarely relaxing.

It is surprisingly good on the motorway though (probably because there are no corners) and cruises along pretty serenely with little wind noise. Visibility out the front is excellent thanks to the near vertical windscreen plus the square shape makes judging where the front of the bonnet is a doddle. Seeing out the back is more of an issue though and reverse parking isn't that easy. There is a reversing camera but the door mounted spare wheel makes judging things tricky.

The standard G-Class is the G350 CDI BlueTec - a 3.0-litre V6 diesel with 210PS and a hefty 540Nm of torque which peaks at just 1600rpm. It's a wonderfully muscular engine and thanks to all that torque pulls superbly well in the mid-range.

It's no slouch away from the lights either, just stick it in D on the seven-speed automatic (the G300 CDI Professional has a five-speed automatic 'box), plant your right foot and it pulls like a locomotive with an impressive turn of pace for a vehicle weighing 2.2 tonnes.

Of course that weight does affect economy with a claimed average of just 25.2mpg but with a 96 litre fuel tank (and a 20 litre reserve) the G-Class won't need filling up as often as you'd think. The other engine was originally the G55 AMG Kompressor, powered by a 5.5-litre V8 with a mammoth 507PS and 700Nm of torque.

It can sprint from 0-62mph in just 5.5 seconds and goes onto a top speed of 130mph which is - very sensibly - electronically controlled. Fuel economy is just 17.8mpg but then if you can afford the uber bling version of the G-Class, fuel costs probably aren't really an issue. It was later replaced by the G63 AMG. 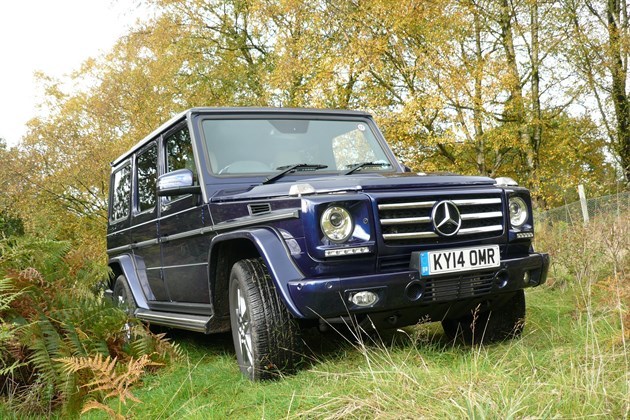