What do owners think of the Jeep Wrangler (2007 – 2018)? Check out our Owners' Reviews from people who live with the car day in, day out.

A rugged hard-worker that can tow heavy loads without breaking sweat and conquer terrain that would faze...

My used car has had faults since I bought it - will my warranty cover them?
If the problem you are experiencing pre-existed your purchase of the car and the warranty, then it isn't covered by the warranty. A warranty cannot cover a pre-existing fault. The dealer himself is liable for that and remains liable for any fault that could have been present or developing in a car for six months from the purchase date. Seems to me that this dealer is trying to wriggle out of his legal liability: https://www.honestjohn.co.uk/faq/consumer-rights/
Answered by Honest John
Just out of warrantee gearbox failure
Chrysler Jeep is in disarray following the FIAT take over so is not in any kind of shape to pressurise over a thing like this. If they won't offer any goodwill, get it out of the dealer and to a member of http://www.fedauto.co.uk who will be much more competent to fix it at reasonable cost.
Answered by Honest John
More Questions

Report of brand new, unregistered Jeep Wrangler Unlimited Overland 2.8CRD bought in Spring 2014 and exported to Jersey. In June / July 2014 a damp area became apparent in the rear passenger footwell. Owner took it to Jeep dealer in Jersey who identified a leak, said it was a quite common problem and a fix would be to replace a rear wing which had a design issue and was known to cause water ingress. Over the next 12 months the leak reappeared in the passenger footwell, then the drivers, then the rear drivers side at various times and the car received a full set of seals, and had the passenger door refitted to try and stop the leak all under warranty and carried out by Motor Mall. During one visit, owner spoke with the Jeep technician who asked whether the car had been in an accident as there were certain matters which weren’t quite right including bolts in the wrong place around the windscreen/A pillar and the rear drivers side door wasn’t fitted correctly. The leak didnt stop and every few months the dealer tried something different. Then in Summer 2016 owner noticed some corrosion on the rear passengers seat belt mount and took the car back to to the dealer. After stripping the car, they had to change all the seat chassis , seat belt mounts and treat the floor pan as if the car had been in a flood. At this stage owner got Jeep customer care involved as he thought this was a major issue which they needed to be informed off, outside the warranty claim. To date, the leak persists and after refitting seals and the car being with the dealer for a further two weeks, the car remains at motor mall awaiting a jeep technician from the UK. Jeep confirmed that this would be the 17 th time the car has been in for repairs to stop the leak and in the 2.5 years of ownership, I reckon the car has been in for repairs for at least five months. Owner believes car was incorrectly assembled and wished to invoke sale of goods against the supplier.

Wrangler and Wrangler Unlimited both retain removable full-framed doors and fold-down windscreen together with a removable hard top that provides more options for open-air driving. The Freedom Top is a three-piece modular hardtop and features separate left- and right-front passenger roof panels that can be removed and stored in the vehicle, together with a rear section that can also be removed.

Most Wrangler and Wrangler Unlimited sold in the UK in 2007 have new 2.8-litre diesel engine, offering 174 bhp and 302 lb ft of torque. Handful of Jeep Wrangler ‘Rubicon’ models will sold with new 3.8-litre petrol engine and additional off-road features making it the best off-road Wrangler ever.

The limited edition Jeep Wrangler 75th Anniversary is based on the Overland model, but with several key differences, including unique exterior styling and part-leather interiors.

Just 66 examples of this special new arrival are bound for the UK – all fitted with Jeep’s 2.8-litre CRD 200PS diesel engine paired to a five speed automatic gearbox. The engine gives the car a 0-62mph time of 10.7 seconds and a top speed of 107mph. The Euro 6 unit can return a combined 31.4mpg and has a 235g/km CO2 figure.

The new Jeep Wrangler Night Eagle will cost £39,810 OTR when it goes on sale in the UK this week. 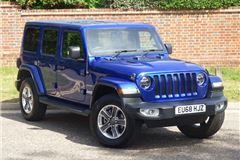 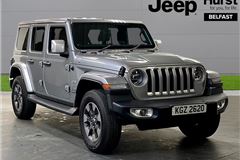 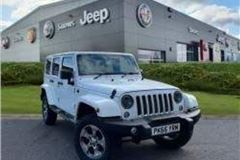