Small rear seats are strictly for children only and rattle when not in use. With belt cam 2.2 PSA engine, crankshaft oil seal failures are leading to clutch slip.

This car is a nice surprise. We had to wait a long time for it because of some complex component sharing.

For the UK the first batch of Outlanders had the same Volkswagen 2.0 TDI PD 140PS as the Mitsubishi Grandis and countless numbers of Volkswagen, Skoda, SEAT and Audi models. And since it emits just 183g/km CO2, that gives it the smallest ‘carbon footprint' of any SUV capable of carrying seven.

Later it got a 158PS version of the new 2.2 litre diesel - developed by Ford, Peugeot and Citroen, and in exchange gave its body to the Citroen C-Crosser and Peugeot 4007.  It also has a 168bhp 2.4 MIVACs petrol engine combined with a CVT automatic transmission.

It's a handsome looking thing, with a front reminiscent of the L200 pick-up and a rear that looks remarkably like a Ford S-MAX. It was later facelifted later with Mistubishi 'jet fighter' look front, giving it a much more aggressive appearance.

What do owners think of the Mitsubishi Outlander (2007 – 2012)? Check out our Owners' Reviews from people who live with the car day in, day out.

Well equipped and seriously well priced. Hard to fault the build quality when you consider the price....
Ford Kuga

Answered by Dan Powell
Is a blown turbo replacement going to cost more than my car is worth?
Reads like a seal failure on the turbo. Check the oil level when the engine is cold (top up if necessary) and then take it to a local garage for a diagnostics check. You should be able to find one with our Good Garage Guide: https://good-garage-guide.honestjohn.co.uk

Answered by Dan Powell
Buying a used 4x4 - Honda CR-V or Mitsubishi Outlander?
Don't get the VW engined or the Peugeot engined Outlander. Only the 2.3 Mitsubishi chain cam engine. There were a few problems with the original CR-V 2.2iCTDI but not heard of any recently: http://www.honestjohn.co.uk/carbycar/honda/cr-v-2002/ He might get a 2006-2009 CR-V 2.2iCTDI. That's a 40mpg car but CRVs are prone to rear axle problems due to water ingress so cannot be driven through floods: http://www.honestjohn.co.uk/carbycar/honda/cr-v-2007/
Answered by Honest John
Need a cost effective 4x4
The 2011 Mitsubishi Outlander with 2.3-litre chain cam Mitsubishi engine is a surprisingly good vehicle capable of fuel economy in the 40s which you won't get from a Discovery. http://www.honestjohn.co.uk/road-tests/mitsubishi/mitsubishi-outlander-gx4-2011-road-test/ But why not simply put a 'CarryBoy' type van back on the L200? If you search around on eBay you can probably get one second hand.
Answered by Honest John
More Questions

Inside you get five comfortable seats, the rear three split, sliding and slightly reclining 60:40 with a sort of trigger mechanism that tumbles them forwards leaving a completely flat load floor with the folded seats as a bulkhead.

Behind them is a small bench of what Mitsubishi calls ‘Hide and Seats' that fold into the load area floor and make all versions of the Outlander nominal 7 seaters. However these seats are so small and legroom so restricted they are only really of any use to pygmies and small children. An adult could not reasonably be expected to travel in them for more than a couple of miles.

However, with the Hide and Seats hidden there is 589 litres of luggage space to the window line. And that S-Max-like rear end is actually split between a hatch and a low tailgate, very useful for sitting on at outdoor events.

Up front, top spec versions come with 30GB hard disc satnav with a Rockford Fosgate 650W 9 speaker sound system (the rearmost speaker is almost the size of a spare wheel). Both the satnav and the sound system are upgradeable and can store a huge number of album tracks. The system can also be used to play video DVDs.

The four-wheel drive system is extremely straightforward. You can select 2WD, which gives front drive only, bringing rear drive into play in very extreme conditions, 4WD AUTO which brings rear drive in at a 70/30 split whenever needed to stabilise the vehicle, and 4D LOCK which provides a lock to the centre diff distributing power 60/40 front and rear at low speed.

What is very impressive is how good this vehicle is to drive.

We were faced with conditions varying from minus 5 to plus 5 degrees on country roads, so 4WD AUTO made the most sense. And set up like that it has really good, confidence-inspiring handling and roadholding, with excellent steering feel. With only 140PS there is no abundance of power, of course and the usual VAG lack of torque below 1,700rpm. But using the clean-shifting six-speed box sensibly you can make very decent progress.

We wound up on Salisbury Plain at the military vehicle testing and training area to check the Outlander's off-road ability.

That is very good too, at least an equal best in class with the X-Trail and completely out-classing the CR-V and RAV-4. Both ascents and descents were made cleanly, with the minimum of fuss in 1st gear and 4WD LOCK. No nasty smells of clutches working too hard.

So, for just 10 grams of CO2 per kilometre more than the RAV-4 2.2 diesel and the Honda CR-V 2.2 diesel, you can have a very competent, fine-handling estate car/SUV with decent off road ability that is capable of carrying seven, at a pinch. A definite recommendation, then.

On sale until December 2009

When buying new or 2nd hand, buyers need to make sure they know exactly which 2.2 diesel engine they are getting. The 2011MY range is available with two engines: a 175PS chain cam 2.3 Di-D M/T Mitsubishi unit on the GX3 M/T variant and a 154PS belt cam 2.2 Di-D SST PSA unit. The 2WD variant is be available with GX3 M/T trim only. The Mitsubishi 2.3Di-D is capable of an excellent 45mpg.

Criticism that very small back seats are also of flimsy construction and 'rock'. Locking problem as TSB in Recalls. More Feedback welcome.

Clutch and dual mass flywheel failures common when towing because 1st and 2nd gears are not low enough to take off without some slip.

On PSA 2.2 litre powered Outlanders, Eolys fluid reservoir bag for DPF regenerating is mounted close to and level with the rear wishbone where it is unprotected and extremely vulnerable to road debris and twigs and rocks while off roading.

Report of clutch failure of 2010 Citroen C-Crosser with DCS (Dual Clutch System) automatic transmission at 42,000 miles. Probably caused by the common crankshaft oil seal failure. Quoted £4,500 to repair, but Citroen offered 60% of parts cost. Dealer told reader that if the transmission itself failed the cost of repair would be a ludicrous £14,000, far more than the vehicle is worth.

Late report of 2010 Outlander SST (with PSA 2.2 angine and dual clutch box) recalled in November 2014 to remove silicone residue from contact points of shift lever. A few weeks previously the owner had paid £2,500 for a new clutch pack. He thought this had been unnecessary, but it was probably needed due to the common cranksaft oil seal failure.

Complaint of cabin fumes in 2010 Mitsubishi Outlander 2.2 (presumed PSA) coming in via vents when stationary and idling. Garage replaced manifold and EGR valve. Fumes still occurring. Possibly caused by too much ash in the DPF preventing exhast fumes freely exiting (see 26-9-2017 above).

In order to keep up with the strong demand for Outlander in Europe and new Lancer worldwide, Mitsubishi Motors Corporation decided to transfer production of the Outlander (for European markets) to its regional production hub (Netherlands Car B.V. [NedCar], Born, the Netherlands) during 2008.

The company originally built Outlanders at its Nagoya Plant in Okazaki, Aichi Prefecture and the new 4007 and C-Crosser SUVs for PSA Peugeot Citroën at its Mizushima Plant in Kurashiki, Okayama Prefecture. As production of the Europe-market Outlander shifts from Nagoya to NedCar, production of the new SUVs supplied to PSA Peugeot Citroën will be transferred from Mitsubishi Motors' Mizushima Plant to its Nagoya Plant.

The first derivative of the new range was a Special Edition variant, the “Juro” available at Mitsubishi dealers from 1 July 2007, the rest of the range from October 2007.

The interior passenger environment is dramatically enhanced with the introduction of faux leather and contrasting stitching on the dashboard and door panels. Furthermore, a new high contrast colour LCD instrument meter display gives a higher quality feel than the current display.

The SST ‘auto’ transmission (except Equippe) uses two clutches, one to engage the gear in use the other to pre-select the next gear required, which ensures that the gear change takes place instantaneously. This innovative technology saves on CO 2 emissions and massively reduces power loss through the range. With no torque converter, this 6-speed TC-SST gearbox is more efficient than a normal automatic.

Hill start assist automatically holds the brakes for about 2 seconds to prevent the vehicle from slipping backwards on steep slopes.

The ESS system automatically detects severe braking to engage the hazard warning lights and also increase braking efficiency. This is just one of the innovative technologies incorporated into the Outlander range to give it its Euro NCAP

Based on Warrior specification (without front resin guard and chrome items) the Juro offers a comprehensive specification including:

Mitsubishi Motors UK announced details of its 2011 Outlander range with significant changes, including the introduction of an all-new 175PS 2,268cc Mitsubishi-developed 2.2 chain cam Di-D engine on all manual transmission vehicles. Also Mitsubishi introduced a 2WD diesel Outlander variant to the UK market to further underline its pursuit of lower CO 2 emissions under its “Intelligent Motion” environmental sub-brand. The new 2.2 chain cam Di-D M/T Mitsubishi Outlander engine is combined with a 6-speed manual gear box, and available in 2 or 4 wheel drive options. It offers:

Performance details for all engines are listed below.

Product Line Up and Specification

11MY range available with two engines: 2,268cc Di-D M/T Mitsubishi chain cam unit on the GX3 M/T variant and a 2,179cc Di-D SST PSA belt cam unit with the A/T versions. The 2WD variant will be available with GX3 M/T trim only.

The 11MY Outlander range available in the following exterior colours: 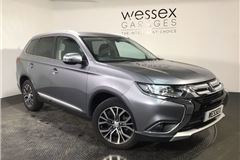 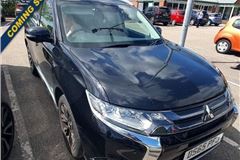 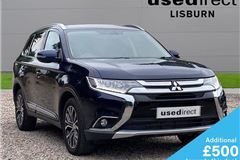