Rear vision not great for reversing. Easy but not exciting to drive.

‘Three' is a very popular lucky number for many people, myself included, but will it be a lucky number for Kia as it launches its third and possibly finally variant to compliment the cee'd and cee'd SW?

Well, initially I thought, why another? But this new three-door pro_cee'd fills a hole in the Kia clan as it is very sporty looking number that should appeal to customers who have so far dismissed the Kia brand as unsuitable for their needs. Not only that, the pro_cee'd is the only three-door in Europe (it's being built at Zilina in Slovakia) to come with Kia's unprecedented seven year, 100,000 mile bumper to bumper warranty, and has stunning looks and severe road presence that will surely appeal to young couples craving street cred as well as older couples whose children may have flown the nest.

You see, what the Korean designers have done that many other manufacturers have not when producing a three-door, is to build it as a completely different car from the five-door. They have increased the overall length by 15mm and reduced the height by 30mm, resulting in a low elongated, coupe-like stance, further accentuated by the 245mm longer side doors and of course the compulsory sporty rooftop spoiler. Add eye-catching solid colours of either red, white or blue along with the standard 16" alloy wheels (17" on pro_cee'd 3 and Sport), and this car will surly send rivals like VW Golf and Peugeot 308 scuttling back to the drawing board.

Looks like a conventional saloon but is actually a hatchback. Huge boot space. Good quality and impressively...

Despite being a three-door, accessing the pro_cee'd proved no problem, even for my larger than life co-driver, thanks to long doors with wide openings. Height adjustable drivers seat and leather height-adjustable steering wheel with remote audio controls are standard across the range, so finding the optimum driving position proved no problem either.

There is plenty of head, leg and elbow room for the front occupants without getting too intimate and even the rear, despite its lower roofline, can accommodate two adults under six feet tall. The luggage area offers a reasonable 340 litres of space which is enough for the tennis gear, but only 80kg of roof load capacity means the surfboard will have to stay at home.

Aiding and abetting the driver is air-conditioning with a cooled glove box, a fully integrated six-speaker RDS radio CD player with MP3 and iPod compatibility that was great in drowning out the cacophony of car horns as we navigated our way carefully around Istanbul. The pro_cee'd 3 gains climate control, cruise control and a ‘Sports Pack', while the pro_cee'd Sport boasts full leather trim, privacy glass, electric folding mirrors with blue tinted glass on the drivers side, follow-me-home headlamps and ESP with EBD.

The instrument dials are easy to read without taking eyes off the road longer than necessary and the whole ambiance of the pro_cee'd reeked of quality even to the materials used in the dashboard. The pro_cee'd really is a pleasing place to be.

What about its driving attributes? Istanbul was chosen for the UK launch epitomising old for new, East meets West, and we started off in the 1.6 litre 16-valve twin chain-cam petrol engine specially developed for the cee'd family. Featuring performance-enhancing continuously variable valve timing and multipoint fuel injection. it develops 124bhp at 6300 rpm and 154Nm at 4200 rpm.

Pretty impressive off the mark, which was an essential ingredient driving in Istanbul, I felt re-assured that this car would get me out of trouble if needed and started to embrace the ride and handling that turned out to be exquisite thanks to the comparative rarity of fully independent suspension all round. The five-speed manual gearbox did the job, while the electronic power steering guided me in an out of the tiniest gaps with ease. But then I was safe in the grip of the powerful all-disc brakes that produced some blinding emergency stops, much needed as yet another Turkish driver attempted to cut me up.

Swooping over into the 1.6 litre turbodiesel (also chain cam) with optional 113bhp over the standard 89bhp and the extra torque was extremely apparent and equally re-assuring as I got to grips with the Turkish way of driving. This engine claims a top speed of 117 mph, but we squashed that theory on some deserted Turkish roads found by chance, and I am sure it took less than 11.1 seconds to reach 60mph. This has got to be one of the sweetest diesel engines I have ever driven and the only slight flaw is that it could have done with a sixth gear.

So would the 2.0 litre belt-cam turbo diesel send me into ripples of ecstasy? Well in theory, yes, producing 305Nm of torque all the way from 1,800 to 2,500, 9.8 seconds to 60mph. But, in fairness, I actually preferred the 1.6 diesel 113 as it felt firmer and more responsive, and what further swayed me was the remarkable 60.1 mpg on the combined cycle, with CO2 emissions an abstemious 125g/km.

Complaint of rust appearing around the front screen trim of a 1 year old pro_cee'd 1.6 CRDI 4. Might be because the screen was replaced and the surface of the metal scratched.

Report of bonnet catch of 2012 KIA pro_cee'd failing at speed and bonnet wrapping itself over roof causing sufficient damage to write off the car as uneconomical to repair. Bonnet catch was rusty so had nont been greased at services. Bonnet secondary retaining catch failed.

September 2010 KIA Pro cee'd diesel taken to KIA dealer becaus eof excessive smoke in December 2015. Dealer kept the car for approximately five months, initially without a loan car, and returned the car fully repaired, so they claimed. With the engine starting to smoke badly again, owner tried another KIA dealer who had the car since August 2017. They returned the car allegedly "fully repaired" in early November 2017. Car taken back to dealer same day because of excessive engine noises. Dealer said had rebuilt the engine with a new top end but admitted had reused several worn parts including the original timing chain which was subsequently found to have stretched and was creating the excessive noises. Dealer still has the car.

In May 2008 a Kia pro cee'd drove from Milan to the Nürburgring, won its class in a 24-hour race, then drove back to Milan. Not only that, but the Kia Italy/Continental Tyres entered car suffered zero mechanical issues throughout the race and was exceptionally light on its feet, using only six 225/35 18-inch ContiSportContact production tyres for the whole event. The pro_cee'd started the race on the same road tyres which had already
completed around 900km on the trip from Milan.

The pro_cee'd was one of 217 cars to start the race. A total of 67 cars dropped out through accidents and mechanical failures, but the pro_cee'd ploughed on to make-up over 100 places from its starting position to finish 104th out of 150 survivors.

New 7-Year Kia Warranty. No mileage limit to the warranty for the first three years, except for vehicles used as a Taxi, when coverage is limited to 100,000 miles. Over the full period of the warranty, the overall mileage limit is 100,000 miles. Qualifications to the new warranty include: paintwork is covered for
5 years (depending on model), audio for 3 years and 60,000 miles and service parts, accessories and batteries for 2 years. Normal 'wear & tear' on items such as tyres, brake pads and clutch linings, are excluded from cover.

Initially launched as a 1.4-litre petrol version in September, the VR-7 special edition is now available with Kia's economical 1.6 CRDi turbodiesel engine in both the cee'd and pro_cee'd family hatchbacks.

The VR-7 special edition adds a host of extra equipment, as well as offering a cost saving of up to £815, over the entry-level ‘1' trim 5-door model it is based upon. Bluetooth, iPod connectivity and reverse parking sensors add extra convenience whilst 16-inch alloy wheels and body-coded, heated and electrically operated door mirrors enhance the exterior looks. Inside, a 6-speaker CD/stereo, leather finish to the steering wheel, gear knob and handbrake lever and ‘one-touch' electric front windows complete the list of additional equipment.

The cee'd was the first vehicle from any Korean manufacturer to achieve a 5-star Euro NCAP rating when it was tested back in 2007 and the VR-7 has a comprehensive array of safety features. A Vehicle Stability Management System - Electronic Stability Control (ESC) with Brake-Assist System (BAS), Electronic Brakeforce Distribution (EBD) and Hill-start Assist System (HAC) - serves to actively help prevent incidents.

The new pro_cee'd ‘4' comes on 17-inch alloy wheels and has black bezel headlights and privacy glass. The interior features full black leather upholstery combined with front heated seats and a leather trimmed steering wheel to add a luxurious feel. Cruise control is standard with controls on the steering wheel.

For the first time in the cee'd range, the new ‘4' grade adds, as standard, a fully integrated Sat-Nav system with a 7" full colour touch screen system. A variety of extra features includes a large selection of European maps, points-of-interest and multi-route planning.

The Bluetooth system can be operated through the touch screen with the ability to download mobile phone directories from up to eight mobile phones. An advanced reversing camera system offers a view of obstacles to the rear of the vehicle and is displayed though the Sat-Nav screen.

The new pro_cee'd 4 is available at £18,495 'on the road' and benefits from Kia's pioneering seven year, 100,000 miles, fully transferable manufacturers warranty. 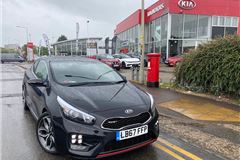