On average it achieves 85% of the official MPG figure Which car to replace my Mondeo ST24 offers good performance and large load carrying ability?
The equivalent quick Mondeo EcoBoosts are now all Powershift autos. The 250PS Focus ST wagon is interesting, but I had problems with its trick diff and I'm not the only one: www.honestjohn.co.uk/road-tests/ford/ford-focus-st-2012-road-test// A BMW F30 245PS 328i would mean getting used to rear wheel drive: www.honestjohn.co.uk/road-tests/bmw/bmw-3-series-f30-2012-road-test// A4 range test here: www.honestjohn.co.uk/road-tests/audi/audi-a4-b8-2007-range-road-test// Have not yet driven a V60. Must put it on the list. New Octavia estate arriving soon.
Answered by Honest John
Do I need my engine flushing?
Probably not in case any residue remains in the engine with the fresh oil.
Answered by Honest John
Which hot hatch?
Only the Honda is belt cam. But the big disadvantage is that it is very low geared, so very wearing on the motorway. Been some timing belt failures of the Volvo T5 engine in the Focus ST. This age of Golf is also belt cam and a 2006 will need its belt replacing if that has not already been done. But best all round driver's car: the Focus ST.
Answered by Honest John
My Ford Focus ST has been revealed as stolen/recovered - what can I do?
You paid full retail for the car, so you are entitled to the difference from the Ford garage that did not show "due diligence" in checking the car's past and instead used a very cursory HPI check to convince you the car had been fully checked. The moral is, of course, to do your own full HPI check. Never rely on someone else's. It also makes sense to redo the finance check on the day you actually pay for the car to cover yourself against a "logbook loan" on the car between the first HPI check and date of payment.
Answered by Honest John
More Questions

Timing belt of Volvo engine can fail at around 60,000 mile so best to change it and the waterpump at this mileage.

Timing belt tensioner of 2.5 litre Volvo engine can fail in as little as 50,000 miles, flinging off the belt and wrecking the engine, then landing the owner with a £6,000 bill.

Report of a/c finally failing in 2005 Ford Focus ST at 60,000 miles. A/c has been regassed in the past but is now not working at all. Local garage gave a price of £587 for a new compressor, plus labour, plus VAT, plus a/c service coming to a grand total of £927.89. We suggested getting a 2nd opinion from an a/c specialist.

Priced from £20,495 and based on Focus ST3. All finished in metallic black with classic silver bonnet, roof and side stripes which are designed to echo the livery of the winning GT40 in the 1-2-3 victory at Le Mans in 1966. Also scarlet leather Recaro sports seats and matching upholstery, special ST500 badging, automatic Xenon high-intensity headlamps, auto-dimming rear view mirror, rain-sensing wipers and solar-reflect windscreen.

In common with other 2008 Focus models, a range of high-tech options can be specified. Among the list is a Tyre Deflation Detection System, a new audio connectivity module for external devices like Bluetooth, voice control and navigation systems plus various infotainment options including an affordable sat nav system with SD card slot.

Mountune Performance package offered from £1,120 (plus fitting) and consists of a larger intercooler, a high-flow air filter and revised engine calibration. Together, this lifts power output from Ford’s potent 2.5-litre Duratec ST engine from 225PS to 260PS at 5,500rpm and from 320Nm to 400Nm at 2,500rpm. Reduces the 0-60mph by 0.6sec to 5.9sec, and the 0-100mph time by 1.9sec to 14.1sec. Performance gain follows similar Mountune upgrades for the popular Fiesta ST which have been made available from Ford dealers earlier this year. Both have been verified on British B roads and over numerous laps of the famous Nurburgring circuit in Germany.

Developed by Mountune Performance in association with Ford Team RS, these packages will only be available at selected specialist Ford dealers' from Sept 2008. The upgrades carry a minimum of 12 months/12,000-mile dealer warranty up to a maximum of three years/36,000 miles. The upgrade kit does not affect the vehicle warranty. 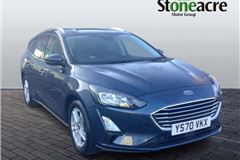