Curious feel-free and heavily self-centering steering. Quite a lot ended up as taxis.

The straight six LS model will set you back a startlingly reasonable £13,595. This is for a big car 15' 9" long with a colossal 480 litre boot and bags of room in the back seat. Usefully, the seatbacks fold down 60/40 so you can carry long loads if you want to.

So what's it like? You can judge for yourself how it looks from the snapshots. I'd stay slightly ungainly. A bit too high off the ground. Though there is a bodykit to address that if you so wish.

What do owners think of the Chevrolet Epica (2008 – 2010)? Check out our Owners' Reviews from people who live with the car day in, day out. 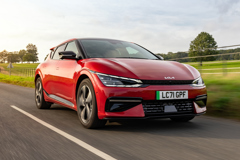 Striking design inside and out. Plenty of space, quality and technology. All versions have a range over...
Skoda Octavia I wouldn't say the engine is silky smooth, but its smooth enough, offering a pleasant drive with decent torque from low revs. No sportscar, but no dullard either.

Handling isn't brilliant, with fairly heavy self-centering that robs the steering of feel when cornering, but it's far from a disaster. It's not floppy and hopelessly light as you might have expected.

The diesel is belt rather than chain cam, four rather than six cylinders, slightly quicker to 60 and with a slightly lower top speed. Naturally, fuel economy is much better at 46.3mpg combined, and though CO2 is a tad high for a diesel at 169g/km, meaning tax on 25% of £14,595 for the LS, which translates to £1,460 for a 40 percenter. Next year's annual VED will be £175.

The problem is it chunders out 210g/km CO2, putting it in the £300 VED bracket next year and 33% BIK: a not so cheap £2,336 in tax for a company driver. It's not that great on the juice, either, offering just 37.2mpg combined on expensive diesel, a full 24% worse than the manual (a factor that people often forget when buying a diesel auto for ‘economy').

The autobox and engine are well suited, the 6-gears, decisively making the most of the diesel's relatively narrow torque band. But the steering was the strangest I've felt for a long time.

It had the same self-centring effect as the petrol car on its smaller wheels and narrower tyres. But in this car the centring required muscle to get the car round a corner and as soon as the wheel was turned off-centre, all steering feel was lost. Maybe that particular car needed a visit to alignmycar.co.uk, but it had the same characteristic as the petrol cars, only much more exaggerated. The only advantage of the steering I could see was a tight turning circle for such a big car.

Oddball new cars, then, with faults. And the best buy is undoubtedly the cheapest, with its unique 2.0 litre chain cam six-cylinder petrol engine. Though I can see cabbies going for the base model diesel too.

Chevrolet does not expect to sell more than 500 Epicas in the UK over the rest of 2008. That's not an ambitions target, so I don't see why it won't.

Backroomer reported, "I have one and use daily, been a good car but high maintenance, by 109,000 I have replaced all the following: check dual mass flywheel, cost about £1,000, track rod ends and the hub as where the track rod end goes through the hub this wears badly (Chevrolet have superseded the part and a new one costs £211 and you will need two), steering rack, all ball joints, diesel particulate filter does not regen (problem in many chevy and vauxs, brake fluid as there is a recall on this, cv gaitors are not flexible enough and wear badly you can replace these with a more flexible gaitor, rear brake calipers are prone to bind, handbrake adjust, all rear suspension bushes and wishbones all round. Lots of costs here to be aware of."

Goes on sale in the UK