Fast but other hot hatches are more enjoyable to drive. Bouncy ride.

Following the launch of the A1 in 2010 it was no surprise to see a performance version of the smallest Audi model follow soon after. But what has come as a surprise is how much power Audi has given the S1. While the similar Polo GTI has a 1.4 turbocharged engine, Audi fitted a far more powerful 2.0 TFSI petrol in the S1.

With a hefty 231PS it boasts even more power than a Volkswagen Golf GTI and a 0-62mph time of just 5.8 seconds. Yet despite that it's relatively economical with an official figure of 40.3mpg, although if you're heavy with your right foot, you'll be very unlikely to see anywhere near that.

The other surprise was the addition of quattro four-wheel drive. Originally the A1 was deemed too small to accommodate a quattro system, although it does come with quite a weight gain - the S1 comes in at 125kg more than an A1 2.0 TDI. However, the quattro system makes a big difference with much improved traction, especially from slow corners.

From a standstill the S1 can feel a little light at the front during flat out acceleration, but the hatch redeems itself when it comes to in-gear acceleration thanks to 370Nm of torque. It means the S1 is very much at home on the motorway without the usual noise that accompanies a hot hatch at higher speeds. Only the bouncy ride lets it down.

Of course the S1 is really designed for twisting roads and here it excels. The suspension has been changed along with the steering, to a more responsive set-up. The result is a tight turn into corners and great traction out of them, while there's little body roll thanks to the stiffer suspension. Few hot hatches this size feel as composed.

It's certainly more grown up than your run-of-the-mill hot hatch, but while the S1 feels very sophisticated it does lack that sense of enjoyment you find in cheaper performance hatchbacks. Don't get us wrong - this is a very capable and impressively fast hatch - but it doesn't quite have the x-factor.

Great performance from 165PS 1.4-litre MultiAir engine, manages to put its power down well, sharp in... 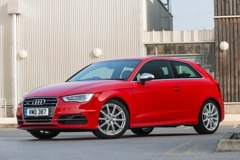 The standard A1 has one of the best small car interiors around, both in terms of quality and design, so the S1 already has a good base to build from. There are key changes including a flat-bottomed steering wheel and half leather upholstery as standard, both with red stitching.

There are also bespoke S1 instrument dials, aluminium pedals and lots of extra gloss trim including the option of a red gloss finish around the gear lever and air vents. As usual with Audi design, everything has an understated quality to it - this is every inch a premium hot hatch.

The driving position is good, even for taller drivers, thanks to plenty of adjustment in the seat and the steering column. Of course given its compact dimensions it's no surprise that rear passenger room is limited - even in the Sportback - and basically non-existent if you have both front seats slid all the way back. But the boot is reasonable at 210 litres and will carry a surprising amount - easily enough for a weekend away.

All round visibility is good making the S1 easy to park in tight spots while on the motorway there's little wind or road noise, making it relatively relaxing on long journeys. Although the bouncy ride always reminds you that you're in a hot hatch.

Given the price tag, it's no surprise to see a high level of standard equipment including climate control, Bluetooth and an iPod connection. The main functions are controlled through a 6.5-inch colour screen that sits on top of the dash. It's starting to look a little dated compare to the tablet-style screens many manufacturers are introducing ands the display isn't that sharp but on the plus side it's very easy to use and the screen neatly folds down when not in use.

The S1 doesn't exactly shout about its performance credentials from the rooftops. In fact aside from the telltale four exhausts at the back, there's little to mark this out from a standard A1.

There are a few styling tweaks though such as the bespoke 17-inch wheels and LED rear lights plus of course if you want to go all out there's the option of Vegas Yellow or Sepang Blue paintwork.

It's under the bonnet where the S1 does its talking. It is powered by a 2.0 TFSI engine with 231PS and in a car that weighs just 1315kg that means rapid performance. Acceleration from 0-62mph takes just 5.8 seconds (fractionally more in the Sportback version) although away from a standstill the S1 does feel a little light at the front end.

There are no issues with traction though thanks to the quattro four-wheel drive system and an electronic differential. The S1 never scrabbles for grip and is superb out of a slow corner, accelerating with no fuss. In high speeds corners it's equally as impressive with good stability and plenty of confidence-inspiring composure.

The S1 is so good it's easy to think this is a bigger car similar to the S3. But the ride soon reminds you that this is a small car with a shorter wheelbase. It's bouncy, even in its most comfortable setting while if you alter the settings through the Audi drive select system to the most dynamic set-up, it's not enjoyable on anything other than perfectly smooth tarmac.

That doesn't detract from the fact the S1 is good on the motorway though. Unlike many hot hatches, it's not buzzy or noisy at speed, helped by a long sixth gear and lots of torque with 370Nm. Given Audi has an affinity for giving its performance cars S tronic automatic gearboxes as standard, it's nice to see the S1 only coming with a manual gearbox. The six-speed transmission has a short shift and lovely positive changes.

Driveshaft, clutch and dual mass flywheel failure reported on 2017 Audi S1 at 13,000 miles. Owner asked to pay £1,770.84. Advised to claim that the clutch and DMF failure were consequential of the drtiveshaft failure.

Report of leaking waterpump in EA888 engine of 2014 Audi S1 at 25,000 miles. Not deemed a "mechanical failure" under 6 month warranty supplied with the car which, of course it is, so liability rests with the dealer who supplied the car.

At the heart of the quattro four wheel drive system is a hydraulic multi-plate clutch located on the rear axle and operated by control software tuned specifically to suit the character of an S quattro model. The electronic differential lock with the fine-tuned wheel-selective torque control is a function of the Electronic Stabilisation Control (ESC). It features two-stage deactivation and supplements the work of the multi-plate clutch with additional finely metered braking intervention on the inside wheels - the interaction of both systems makes for extremely agile, precise and stable handling.

The suspension configurations have been extensively reworked, as has the electromechanical power steering. Modified pivot bearings on the front axle sharpen response when turning, and at the rear a four-link design replaces the torsion beam suspension used for 'standard' A1 models. Damper settings are also adjustable via the Audi drive select adaptive dynamics system, which appears for the first time at this level in the S1 and also allows the driver to vary the response of the throttle and the operating parameters of the electronic climate control across a number of settings, including one designed to optimise efficiency.

17-inch wheels with 215/40 R17 tyres are standard in the UK, with 18-inch alternatives available as an option, and a larger brake master cylinder and large brake discs - the front pair measuring 310 millimetres in diameter - ensure suitably steadfast deceleration.

Interiors of Audi S1 and S1 Sportback is finished in dark tones. The high gloss air vent sleeves have a piano black finish, the instruments feature S-specific dark-grey scales, and in contrast the pedal caps are in brushed stainless steel. Sports seats with combination Milano leather and Olympic cloth upholstery are standard, as are creature comforts including electronic climate control, a six-speaker single CD audio system with auxiliary iPod connection and SD card reader linked to a 6.5-inch retractable colour display, a Bluetooth interface and a Driver's Information System.

Audi drive select now standard from Sport upwards. Both the steering and the optional suspension with adjustable damping are controllable via the Audi drive select adaptive dynamics system, which is a new standard feature for A1 Sport models upwards. It allows the driver to vary the weighting or the damping characteristics across three modes - auto, dynamic and efficiency - and it can also adjust the operating parameters of the engine and the S tronic transmission, where this is fitted.

Interior ambiance has also been lifted by additional chrome and high gloss black detailing, new upholstery choices including an Alcantara and leather blend and new upholstery colours, such as Laser blue for Sport models and Rotor grey for S line models, which until now have had an exclusively black finish.

The Audi S1 and S1 Sportback with 231PS and quattro permanent all‑wheel drive remain as the performance flagships of the new range. Their 2.0 TFSI engine produces 231PS and 370 Nm (272.9 lb‑ft) of torque, enabling the three-door version to sprint from rest to 62mph in 5.8 seconds (Sportback 5.9) and to reach a top speed of 155mph.

Exterior and interior details emphasise the position which the S1 and S1 Sportback hold in their segment, as does their extensive specification, which now also includes the Audi Music Interface and navigation preparation in line with Sport and S line versions.

Audi A1 for sale 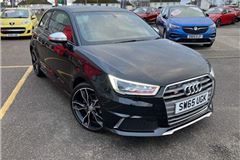 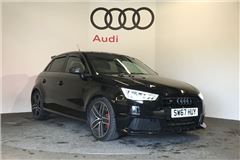 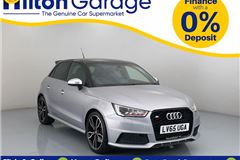