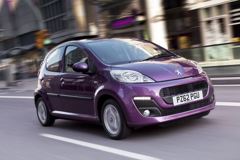 Answered by Dan Powell
Why is water getting in the driver side footwell when using the rear washer?
There will be two pipes from the pump. One goes to the front screen washers. The other goes through the car, either inside the roof lining or along the floor, to the rear washer. If the rear washer does not work at all, then the pipe has come off a union.
Answered by Honest John
Auto gearbox oil changes - when do I have to change?
The Civic has a 5-speed torque converter auto and the Alto has a 4-speed torque converter auto. It would probably benefit both to change the fluid after 5 to 6 years. Not as necessary as with a Dual Clutch transmission, a CVT, or a torque converter auto with 6 speeds or more (some now have 9).
Answered by Honest John
Which city car auto is best?
The i10 or the Picanto. The Alto will be cheaper, but not better.
Answered by Honest John
More Questions

Complaint of exhaust resonance on three different Suzuki Altos corresponding with a lack of power in wet weather. May have something to do with the failing engine/transmission mountings.

The new Alto is powered by a three cylinder 1.0-litre petrol engine successfully launched as an engine of the Splash. This unit is light and compact with low friction characteristics. Maximum power output is 68PS (50kW) with maximum torque of 90Nm. Fuel consumption is low at 64.2 mpg on the combined cycle and CO2 emissions are just 103g/km. Standard transmission is a five-speed manual and a four-speed automatic transmission (uncommon among one-litre cars) with gate-type shifter is available as an option.

The front suspension is MacPherson strut and the large, high-rigidity suspension frame is complemented by further strengthening in the strut mounting areas for superior handling. The rear suspension has Suzuki's proprietary 3-link rigid axle design, and incorporates numerous refinements for the new car. The coil springs and dampers were tuned for optimum handling stability through extensive testing on roads in Europe. The new Alto has a minimum turning radius of just 4.5m making it easy to manoeuvre and park in tight spaces.

On sale in the UK from 1 March 2009. Prices from £6,795 to £7,995. All have an MP3/ WMA stereo, remote c/l, electric front windows and an intermittent rear wash wipe. The SZ3 gets air con. The range-topping SZ4 adds a rev counter (in a dash-top pod), ESP, curtain bags, alloys, front fogs, 4 more speakers and more colour coding. Built by Suzuki Motor Corporation, at the Maruti plant, Delhi, India.

New SZ-L model based on the SZ3 mid grade model with air conditioning; pollen filter and side airbags as standard equipment but offers added customer value with a higher specification including front fog lamps and various exterior and interior upgrades; all for £8,170.

Interior upgrades include SZ-L carpet mats; silver coloured trim for gearshift knob, side ventilation louvres and door openers. The SZ-L individual theme is continued for the heater control, gear lever and door handle surrounds which are coordinated in body colour. Cost of ownership is also very low with an annual VED charge of £20 and insurance group 1E classification.

Alto SZ4 model with equivalent of no VAT to pay until the end of September 2010 and represents a customer saving of £1,332 on the SZ4 model, reducing the purchase price to £7,608.

Under a separate campaign, Alto SZ2 is available for just £6,495, saving £1,160 on the list price. The Special Edition SZ-L is equipped as standard with front fog lamps, air conditioning and various exterior and interior trim upgrades and is available for £6,995, a saving of £1,175.

Alto Play is based on the popular SZ3 mid grade model with air conditioning, pollen filter and side airbags as standard equipment but offers added customer value with a higher specification including front fog lamps and various exterior and interior upgrades. Alto Play is recognised by its stylish Oyster Blue metallic paint finish; unique blue seat fabric, silver accent on the front bumper and body coloured door handles and mirrors.

Suzuki’s smallest model, the Alto, has been refreshed for 2012, with new colours and lower emissions. The cleanest manual model now emits 99g/km of CO2, making it congestion charge exempt and allowing it to qualify for the free annual VED. Prices start at £6995.

The improved emissions bring the benefit of reduced fuel consumption, which is 65.7mpg with the manual gearbox. The improved fuel economy and lower emissions are owed to a new Dual VVT system, which also improves throttle response of the 68bhp three-cylinder petrol engine.

The optional automatic transmission is cleaner and more efficient than it was previously, too, with emissions down to 118g/km from 122g/km, which equates to £65 reduction in annual VED bills after the first year, which is free. It’s a true four-speed automatic, rather than an automated manual.