Rolls-Royce Phantom At A Glance

New prices start from £320,175
Insurance Group 50
On average it achieves 89% of the official MPG figure

What do owners think of the Rolls-Royce Phantom? Check out our Owners' Reviews from people who live with the car day in, day out.

What does a Rolls-Royce Phantom cost? 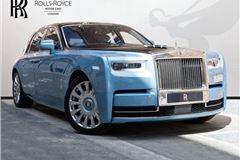