Porsche Panamera At A Glance

New prices start from £84,610
Insurance Groups are between 49–50
On average it achieves 87% of the official MPG figure

It isn’t cheap, but the Porsche Panamera combines all the precise handling prowess of a sports car with the luxury, comfort and practicality of a high-end saloon. It isn’t quite as family-friendly as a Cayenne nor is it as luxurious as a limo like the Audi A8, but it’s much easier to live with than a 911.

It’s seriously impressive just how well the Panamera blends typically paradoxical qualities. If you want to simply drive to the local restaurant or pick up some shopping it's quiet and cossetting, with excellent ride quality and an almost silent cabin. Similarly, it will cope with long motorway drives.

But take it to your favourite road and it really comes alive, with surprising poise, fantastic steering and lots of lovely noise, even if you go for a diesel or hybrid version. The engine range consists of 2.9-litre and 3.0-litre V6 petrols, plus a 4.0-litre V8 petrol and a 4.0-litre V8 diesel.

You can also get two plug-in hybrid versions, which combine a battery pack and electric motor with either the 2.9-litre V6 petrol or 4.0-litre V8 petrol. Both versions are capable of covering a short commute on electric power alone, provided the batteries are charged up.

Inside, the Panamera is exquisite. The fit and finish is impeccable and there’s a high-tech layout, with touch-sensitive controls for more or less everything in the centre console and stack. There’s also a large, clear, responsive touchscreen system and sensibly-placed steering wheel-mounted controls.

The Panamera is a four-seater, so there is no middle seat, but the rear row provides a good amount of leg and headroom, while the hatchback makes access to the sizeable boot very straightforward compared to a saloon. The rear seats can be folded down for bulky items too.

Compared to the Audi A7 Sportback or BMW 6 Series Gran Coupe, the Porsche Panamera looks, feels and drives like a more special car. It’s a superb piece of engineering that does everything any enthusiastic driver could hope for. But there is a very high price to pay, and full-size executive saloons like the Audi A8 are more comfortable if you're more interested in sitting in the back.

What do owners think of the Porsche Panamera? Check out our Owners' Reviews from people who live with the car day in, day out. Bigger and more economical than the old model. Great to drive on-road but with typical Land Rover off...

On the inside of an Porsche Panamera

Inside, Porsche has given the Panamera a very modern, clean layout. The chunky centre console and stack is covered in touch sensitive buttons to control everything from temperature to drive mode – but these cleverly have haptic feedback, so respond with a click, just like an old-fashioned, analogue button.

There’s also a wide, responsive touchscreen system at the top of the centre stack that works well and is packed with high-tech features including controls for in-car WiFi. The instrument binnacle has digital elements too, which the driver can configure to show their choice of info. A big, central rev-counter remains the focus though, as is typical for Porsche cars.

Material quality is wonderful. The cabin not only looks space age, it feels like it could survive a trip to Mars and back – everything is beautifully installed and feels as durable as it is luxurious. There’s a surprising amount of space, too, with room in the two rear seats for adults to get comfy – although there is no middle seat.

If you need even more space, there is an “Executive” body style, with a longer wheelbase for more rear-seat roominess. Optionally, there are plenty of extras for those in the back row too including 10-inch displays that are integrated into the headrests of the front seats.

The boot is a good size at 495 litres, which is plenty for shopping trips, luggage or golf bags. You can also fold the rear seats down to free up some extra space, which should enable trips to Ikea. The sloping tailgate design does limit the bulkiness of the objects you can carry, though.

Standard equipment includes all the essentials, with climate control, cruise control, navigation, DAB radio and Bluetooth. Executive versions get more gear including air suspension, a panoramic roof and soft close doors. But you're unlikely to buy a Panamera without options - and there are lots.

Extras across include massage seats, a thermal imaging camera and a huge variety of interior and exterior customisation, from paint colours to alloy wheel designs and upholstery finishes.

Porsche hasn’t held back when it comes to engine options for the Panamera. There’s an entry-level 3.0-litre V6 petrol, a more powerful, twin-turbo 2.9-litre V6 petrol, available with or without a hybrid system, a 4.0-litre V8 diesel and a 4.0-litre V8 petrol – the latter of which is also available with or without hybrid technology. Something for all tastes, as long as you want to go quite quickly.

There isn’t a bad choice among them – all of the engines produce a broad spread of useable torque, sound good and come with a slick PDK automatic transmission. The result is great performance on the road in almost any circumstance, whether you’re on a relaxed motorway cruise or an exciting country road.

If you want the absolute best performance, then the Panamera Turbo is the place to start. With 550PS and a 0-62mph time of 3.8 seconds, it really is rapid. But if you want to be responsible with your power, you can ally the Turbo to a hybrid system, improving fuel economy and giving a limited pure-electric range – though to use that you do need to keep the battery topped up from the mains.

Another way to look after your fuel economy is to go for the 4S diesel. It has an official figure of 42.2mpg, plus an insane 850Nm of torque from just 1000rpm, which makes for surging acceleration when on the move. And, since it’s a 4.0-litre V8, it even sounds good in a muted sort of way.

Regardless of engine, the Panamera is very quiet and comfortable most of the time. The seats are supportive, the driving position is good, the suspension soaks up bumps and the level of refinement is superb. You can spend hours at the wheel without getting tired.

But the Panamera works on a road with corners too. The steering is precise and beautifully weighted, body control is great and there’s loads of grip, thanks to the all-wheel drive system fitted to all but the most basic, 3.0-litre versions. The muted engines also start to sound a bit more exciting when you push them hard and use all of the rev range.

It’s surprising just how enjoyable the Panamera is to drive, given the level of comfort and refinement it provides. But there is no escaping physics – and this is a heavy car. So, while it has precise steering and good suspension, it never feels as agile or as lithe as a 911, Cayman or Boxster, even though it tries its best. 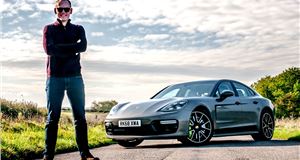 The engines and transmissions have been redesigned, the chassis and suspension optimised, and the driver display and control interfaces reinterpreted for the future.

Visually, the unique design of this Porsche is reflected in a new expressive appearance: unmistakably a Panamera, unmistakably a sports car – with long, dynamic proportions, pronounced shoulders, athletic flanks and an extremely ‘fast’ (rearward sloping) roof line that is 20 mm lower at the rear. This typical Porsche outline silhouette, or ‘flyline’, creates a stylistic link to the Porsche 911.

Black panel surfaces and interactive displays combine a clear and intuitive user interface - similar to that of smartphones and tablets - with the practical requirements for controlling the car. The number of traditional hard keys and conventional instrument dials have been reduced significantly.

They have been replaced by touch-sensitive panels and individually configurable displays which take centre stage in the new Porsche Advanced Cockpit – with great benefits for the driver as well as the front and rear passengers. Despite a significantly extended range of communication, convenience and assistance systems, different functions can now be used and operated more clearly and intuitively.

All of the second generation Panamera engines have been redesigned. Each has been made more powerful, while significantly improving fuel economy and reducing emissions. Three new bi-turbo direct injection engines are being introduced at the market launch: in the Panamera Turbo, the Panamera 4S and the Panamera 4S Diesel.

The integrated 4D Chassis Control system analyses and synchronises all chassis systems in real time and optimises the road performance of the new Panamera. Porsche is also taking knowledge in the areas of steering precision and handling from the 911 Turbo and 918 Spyder, and adapting this for the Gran Turismo, with new rear axle steering feature. Brake performance has also been improved.

Initially, the Panamera Turbo has the most powerful petrol engine of the model series. Its 4.0-litre bi-turbo V8 develops 550PS (at 5750rpm) and a maximum torque of 770Nm (between 1960 and 4500rpm). It has 30PS more power than the previous model, and its maximum torque has been increased by 70Nm.

The eight-cylinder engine accelerates the Panamera Turbo to 62 mph in 3.8 seconds; with the Sport Chrono Package the sprint time is just 3.6 seconds. The Porsche can reach a top speed of 190 mph.

The new Panamera is launching with a new eight-cylinder diesel engine, for the first time in conjunction with permanent all-wheel drive. The most powerful diesel implemented in a Porsche production car to date develops a power of 422PS (at 3,500 rpm) and an immense maximum torque of 850Nm – which is constant over an engine speed plateau extending from 1,000 to 3,250 rpm.

With a top speed of 177mph, the Porsche Panamera 4S Diesel is currently the world’s fastest production vehicle with a diesel engine. The Gran Turismo achieves the 0-62 mph benchmark in 4.5 seconds (4.3 seconds with the Sport Chrono Package). This contrasts with a combined fuel consumption of 41.5 – 42.1 mpg (178 – 176 g/km CO2).

What does a Porsche Panamera cost? 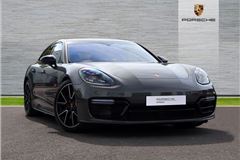 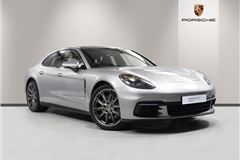 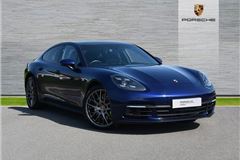