Has the hardware and ability for serious off-roading. Easy-going, pleasant drive. Useful tow car. Owners like them. Excellent value.

Doesn't handle as well as a RAV-4 or X-Trail.

On average it achieves 83% of the official MPG figure

Exceptional comfort and practicality makes this the best family SUV around, all rear seats fold down...
Jeep Grand Cherokee

Can you recommend a towing vehicle for a small budget?
You're certainly thinking along the right lines - we'd be avoiding Land Rovers at this price, too, and the Kia Sorento/Hyundai Sante Fe/Mitsubishi Shogun/Toyota Land Cruiser all sound like more sensible options. Have you considered a SsangYong Korando? They're very popular with the towing fraternity due to their two-tonne towing capacity. You should be able to find a fairly tidy 2012 model within budget. We'd also recommend a Honda CR-V. Certain models can tow up to 2000kg. It should be a very reliable choice, too.

Answered by Andrew Brady
Best used 4x4 for towing?
This model Sorento is starting to fall apart. Reliability definitely not guaranteed. But it is at least a chain cam engine. Can't guarantee reliability of any big 10 year old 4x4 in this sort of price bracket.
Answered by Honest John
Which used car is best for towing?
Look in front of the caravans being tugged down our motorways and you will see a fair few old model Sorentos. It's not all perfect, though. Avoid the big wheels and low profile tyres. And check out the entry in http://www.honestjohn.co.uk/carbycar
Answered by Honest John
What car is best for carrying dogs?
In my view it is basically stupid to destroy a good car by carrying dogs in it. Far better to keep a decent car for personal use and buy an ex-police dog van with proper cages and ventilator. These regularly come up at West Oxfordshire Motor Auctions on Tuesdays, usually based on Mondeo or Focus estates and sell for £1000 - £2000.
Answered by Honest John
More Questions

Inside, the width impresses. There's about a foot between the front seats with a voluminous armrest cubby, cupholders and oddments trays. The dash is simple and understandable. The radio with its single slot CD player and four CD store is set high up in your line of sight. Fit, finish and quality of the plastics is very good indeed, and definitely not a poor relation to anything from Europe or, in the case of the X5 and ML, from America. It's so good that the cockpit photo alongside is of the cheaper XE interior, not that of the wood and leather XS. A thoughtful touch is that both driver and passenger seats fully recline into two single beds, which could be very handy for long trips or off-road expeditions.

Out on the road it's no sports car, not even a 4x4 pretending to be a sports car like the BMW X5 ‘Intimidator', but performance is perfectly adequate. Off the road, and this is a genuine ‘off-roader', it so outclasses the X5 I can imagine Sorento owners kindly throwing a tow-line to X5 drivers in distress. It's the kind of car that brings out the best in a person's character.

While it doesn't have diff locks, it does have a limited-slip rear diff and an electronically selectable low range, which is essential for steep hills and descents. On the test-drive it handled everything a course around an eroded slag-heap could throw at it, never once showing any sign of temperament from its suspension, its drive-train, its steering or its engine.

Back on the road, it's a good long-distance cruiser and XS models, whether automatic or manual, have decent cruise control; something I'm no fan of on Britain's crowded roads but do admit it could be handy on a long cross-continental haul. Gearing works out at about 27mph per 1,000rpm in the manual and about 29mph per 1,000 in the auto.

Get it on a twisty road or a roundabout and you find its limitations quickly. This is, after all, a big 4x4 with a live rear axle. But handling is more in the class of a Shogun than an old Discovery and you can make decent progress.

This is a big 4x4 that looks like a monocoque Lexus RX300 but actually has a ladder chassis beloved of caravan and trailer towers everywhere. The maximum towing weight is a high 2,800kg. But for caravan towing purposes, using the 85% rule, its high vehicle weight of 2,056 to 2,102kg allows you to safely tow up to 1,787kg, the weight of a substantial twin-axle bungalow on wheels. Fully aware of this, KIA has equipped all UK market Sorentos with self-levelling suspension as standard. So a towing hook is likely to become a very popular accessory.

The KIA Sorento kicks off at a very reasonable £17,995: £1,000 less than the Nissan X-Trail 2.2DI Sport 6-speed, and less than half the price of the average X5. For this you get an awful lot of standard kit (read below) and five massive alloy wheels with sensible, bump-absorbing 245/70 R16 tyres. Go searching for the hidden 5th (spare wheel) and you're in for another surprise.

A large wet tray under the load area floor for your fishing oilskins, diving BCDs, inflatable dinghy or whatever else suits the sort of lifestyle the Sorrento can get you to. It's a friendly car that's going to make an awful lot of friends.

Seems to be a problem with 18" wheels on some XT models leading to slip sensor trouble and the wrong messages to the transfer box.

Manual transmission problems increasingly common after around 4 years and around 80k miles, particularly when used for towing.

On LPG gas converted 3.5V6s, after around 6 years, manifold swirl actuators can break off and get tangled in the valves.

Beware of misdiagnosis of faults by Kia dealers: The symptoms were very rough running after the first start of the day which cleared after the first 100yds and a flat spot when accelerating from a standing start. The flat spot had got so bad that pulling out from a side road was becoming risky. Kia dealer had the car for 10 days and diagnosed “suspected faulty fuel injectors”. Two solutions; have the injectors cleaned at a cost of £1,010 or fit new injectors at a cost of £1,500. A diesel injection specialist diagnosed the problems as a stuck EGR valve which he cleaned and put back, and the starting problems as failed glow plugs of which he replaced all four. He took out the injectors and confirmed there was nothing wrong with them. The car then runs as well as it had when new.

One reader suffered repeated fuel shut downs from a 2004 XE CRDI. The fuel filter was replaced several times but the shut down continued, always on hard acceleration joining a motorway. Might be the fuel tank liner coming off, might be the fuel tank sender pump or its relay or the earth to the pump or the relay.

4WD system cannot tolerate more than 2mm tread difference front to back, so best to swap tyres front to back mid-life to even out wear.

Glowplugs prone to breaking on attempts to remove to replace. Then requires removal of cylinder head to get them out.

Reader thinks there is a problem with rusting rear trailing arm brackets. Thinks that around 10% on 2003-2009 Sorentos have corroded sufficiently to require urgent replacement. Kia has issued a TSB to inspect these and replace as necessary, but, of course, TSBs only find cars and owners known to KIA dealers. He feels the key question is how soon after an MoT can these brackets rot away. Within 12 months big problem? More than 12 months not so safety critical.

Report that MoT 'rolling road' brake testing of a 2007 KIA Sorento "damaged a bearing in the differential" leaving a £2,500 repair bill. (Probably the centre diff.) Should only be brake tested on a rolling road suitable for 4x4s.

Another report of fuel tank delamination in a first generation Sorento.

Five-speed Sports H-Matic automatic gearbox replaced 4-speeder. Up to 9% improvement in fuel consumption on Sorento. Gearbox combines convenience of an automatic gearbox in traffic with manual control that many drivers desire on the open road. Sorento 2.5 engine also optimised with enhanced torque: 343 Nm between 1850-2500 rpm compared to 314 Nm previously. Top speed of auto increased from 104 mph to 106 mph. 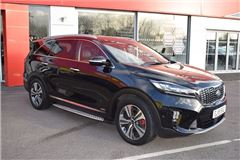