Why is my heater blowing cold air?
That means that hot coolant from the engine is not reaching or is not circulating through the heater matrix. May be a stuck electric valve.
Answered by Honest John
Which tyres are best for the Jeep Compass?
The Nokian zLine SUV Summer tyre has just won the Auto Bild allrad’s and OFF ROAD’s SUV summer tyre tests 2015. It achieved the top ratings “exemplary” and “highly recommended”. “Very good wet grip, short wet braking distance, very balanced summer tyre” are the “strengths” of the new Nokian Line SUV summer tyre according to Auto Bild allrad (4/2015). The tyre achieved top results in both the wet and off-road subtests. As the outright test winner, new Nokian zLine SUV was awarded the overall rating very good by the 4x4 magazine OFF ROAD (4/2015). “Strength: The Nokian achieves top ratings for braking and handling on dry and wet surfaces.” The Nokian zLine SUV from Finland also takes first place thanks to its low rolling resistance. “The winner in this category is amazingly the Nokian, being the only top tyre to successfully balance low rolling resistance with good grip.”
Answered by Honest John
More Questions 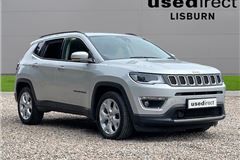