No diesel and only one petrol engine in the line-up. Doesn't hold the same status as a BMW or Audi.

Impressively refined with a smooth ride. Metal folding roof means it's as quiet as a coupe. AMG versions...
Infiniti Q60

Good-looking coupe that's a rare sight compared to rivals like the Audi A5. Strong performance from 3.0-litre...
BMW 4 Series

Can not driving a car enough cause brake pad and rotor issues?
Yes, because all the time the car is left standing in winter conditions condensation moisture corrodes the brake discs. If the car is used frequently the action of the pads on the discs cleans off the corrosion. It's usually worse on the back because rear brakes only account for about 5 per cent of the braking of the car.
Answered by Honest John
More Questions

Standard features are as for the G37 Saloon range with the exception of the reclining rear seat and the addition of the following:

As well as Connectiviti+ satnav, Premium models come as standard with a Bose 11-speaker sound system, complete with HDD space for up to 300 CDs, reversing camera and Infiniti's innovative safety technology, Intelligent Cruise Control (ICC). Choice for buyers is made even simpler for 2010 by a streamlined entry-level range for both Infiniti G and Infiniti G Coupe. But while there are now fewer options, the entry models continue to be as well equipped as ever with xenon cornering headlights, parking sensors, powered front seats, electrically adjustable steering column, 18-inch alloy wheels, i-Key smart access, cruise control/speed limiter and Scratch-shield paint all part of the deal - along now with all the multimedia advantages of the Connectiviti system. Even in standard form, Connectiviti comes with features such as seven-speaker stereo, iPod/USB compatibility with AUX-in RCA, Bluetooth audio streaming, 1CD reader with MP3 WMA compatibility and 2Gb Infiniti Music Box. 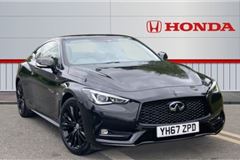