Rolls a lot in corners, no longer congestion charge exempt after 2011.

The UK market Honda Civic IMA was always a bit of an oddball. An Integrated Motor Assisted 1.3 engine, 5-speed manual transmission and a four-door saloon body.

The new one, now called Honda Civic Hybrid, has a Jazz 1,339cc engine modified with self closing valves. And, taking a leaf from Toyota's Prius book, a CVT rather than a manual transmission.

What do owners think of the Honda Civic Hybrid (2006 – 2011)? Check out our Owners' Reviews from people who live with the car day in, day out. 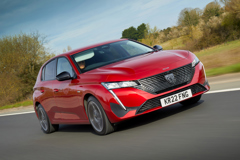 Selling two cars for one
The GT86 is pure sportscar, thrives on revs, bogs down at low revs because has very little torque. Never got to drive the auto, Price is okay. You can price your two existing cars here: http://www.honestjohn.co.uk/used-prices/ Don't p/x two for one or you'll lose a bundle. May make more sense to sell one or both to http://www.webuyanycar.com/
Answered by Honest John
Insight, Prius or Civic Hybrid?
The Insight was built to be cheaper in the first place. But the Civic hybrid doesn't drive very well. A Prius, even the old Prius, is better than both.
Answered by Honest John
Is the Toyota Prius hybrid's plug-in charge just a gimmick?
The Prius Hybrid may have a shorter range than a full electric car but means no 'range anxiety'. It will always get you home. But if you go all-electric, the Renault Zoe, from £14,000, beats everything.
Answered by Honest John
Recommendation from HJ - I'm buying a small/medium family car
The automatic requirement hugely restricts your choice. Maybe you could find a Nissan Note 1.6 auto for your money. Avoid DGS and automated manuals like i-shifts.
Answered by Honest John
More Questions

The seating and driving position are very comfortable, though. With about the best, most convenient parking brake I have encountered on any car recently. It's perfectly positioned and angled on the driver's side of the central console and a pleasure to use. I like the steering wheel too. It's leather bound, quite small, slightly octagonal, with easy to use radio and cruise control buttons set into the spokes.

Whereas the Thai market Civic 1.8 saloon has fold-down rear seats so luggage can poke through from the boot, there's no such thing on the Hybrid because the space over the back wheels is occupied by the batteries. So it's a lot less versatile than the Prius hatchback. That said, it is a proper five seater with a completely flat rear floor.

Like the old car, leather seats are the only option. Unlilke the old car, and like the UK built Civic 5-door, you get a superb line-of-sight digital speedometer and a rev counter seen through the steering wheel.

With a CVT transmission and electric motor assisting the petrol engine, that rev counter performs some peculiar tricks. On hard acceleration it flicks round to 6,000rpm and stays there while the car gathers speed. Alternatively, it will cruise at 30mph per 1,000rpm, and more than 30mph per 1,000rpm descending a long hill, foot off the beans, where you can be travelling at 95mph, at 100mpg and recharging the electric motor's batteries at the same time.

With more conventional controls than a Prius II, the Honda Hybrid seems to be more sporty, and will pick up speed with some alacrity. But the illusion disintegrates on twisty, hilly country roads when a sort of inertia sets in to the way the car handles. It just isn't sprightly.

And progress is certainly far from jerk-free. In the badly signposted, speed camera-festooned traffic nightmare that is Northamptonshire (try following the A43 from Towcester to Corby**) it was roly-poly rounding roundabouts and almost impossible to start smoothly from the umpteen thousand sets of traffic lights. Part of the problem here seems to be the flywheel effect of the electric motor requiring more braking than you would otherwise need. As Andrew English pointed out in his Telegraph test, you are never quite sure how much braking you are going to need with the result that a minor braking drama can quite suddenly turn into a crisis. Then when you are stopped in Drive, the motor shuts down, so you are forced to apply the parking brake or footbrake to stop the car rolling back on a hill.

Fuel economy was good, though not brilliant. Over 281 miles we averaged 42.7mpg. So it looks like the main benefit of the car will be avoiding city centre congestion charges. Or, if you want to put it in more environmental context, avoiding emitting harmful NOX that is the big disadvantage of a diesel engine.

On sale until December 2018

DO NOT JUMP START. Hybrids should be trickled charged, not jump started (bulletin from Toyota how to do it correctly). If a recovery agent connects jump leads directly to either hybrid battery and than to his battery the sudden charge can damage circuits with in the hybrid system (not necessarily the ECU). It seems that not all recovery companies are familiar with the correct jump start process . Damage can be caused which will not be apparent at the time.

New 1.3-litre 3-stage i-VTEC engine with a more efficient Integrated Motor Assist system (IMA), which can improve the recovery of braking energy by 10% compared to the current Civic IMA. In addition, the new Honda Hybrid System achieves an approximately 20% greater output over the current system – and its performance is equal to that of a 1.8-litre engine – while improving fuel economy by 5%.

High-spec, Sat Nav-equipped Civic Hybrid EX available to order from late August 2007. EX also features leather upholstery and Honda’s Hands Free Telephone (HFT) equipment, which uses Bluetooth technology to allow mobile phone calls to be made safely on the move. Civic Hybrid EX is priced at £19,300 OTR. With its level of equipment, the closest rival to the EX is the Toyota Prius T Spirit, priced at £20,677. Controls for the HFT kit are mounted on the steering wheel, while the DVD Navigation unit in the Civic Hybrid EX replaces the existing 6 CD changer, mounted in the dashboard, above the air conditioning controls.

As well as offering maps of the UK and Western Europe, it can monitor traffic congestion and advise the user on alternative routes. In addition, the Honda Sat Nav system can be controlled by voice recognition. Just hold the correct button, say the word ‘Restaurant’ and the system will locate the nearest places to eat, and then direct you to them. 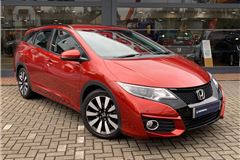 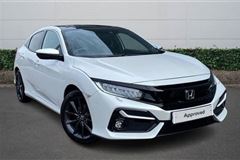 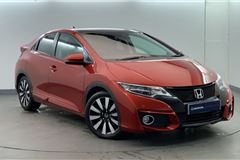