The 'new' Passat was revealed

The latest Volkswagen Passat has a new Volkswagen corporate front styled by Klaus Bischoff (head of design, Volkswagen) and Walter de Silva (head of design, Volkswagen Group). The front of the car, dominated by a new grille element with prominent horizontal chrome fins, features striking heavily contoured headlight units, set into which are LED running lights. At the rear a set of distinctive tail lights is joined by subtle chrome highlights that extend down the side of the car. Every body panel apart from the roof is new. 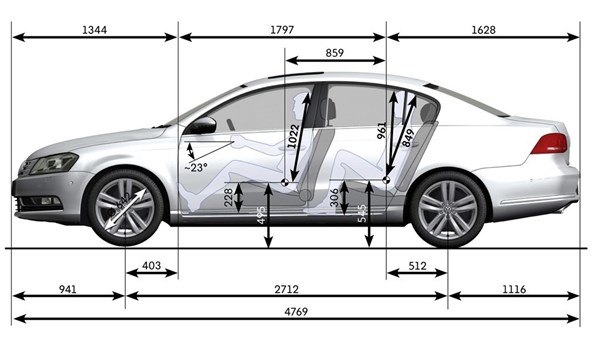 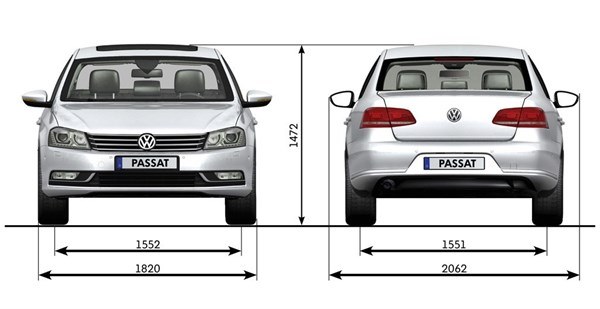 The fresh look continues inside the 7th generation Passat with new seats that can be specified to both heat and cool their occupants and even feature a massage function for the driver and front seat passenger. A revised dashboard with new dials, trim finishes and an analogue clock are joined by subtle chrome inserts and the option of ambience lighting similar to that found in the Phaeton. The centre console has also been uprated with revisions to the minor controls as well as new door trims.

The refined and frugal diesel range starts with the most efficient engine, the 1.6-litre TDI unit producing 105 PS. Equipped with this engine and the BlueMotion package of changes including aerodynamic modifications, Stop/Start and battery regeneration, the new Passat can achieve a combined 68.8 mpg while emitting just 109 g/km of CO2. This equates to a theoretical range of over 1000 miles on a single tank of diesel. Joining the 1.6-litre TDI is a 2.0-litre TDI engine available in two power outputs – 140PS and 170PS. Each of the engine ranges can be specified with a choice of manual or DSG gearboxes.

The new Passat is available with many new safety and comfort technologies previously only seen in the Touareg and Phaeton luxury models. The optional new City emergency braking function, a part of the Automatic Distance Control (ADC) system, automatically engages the brakes at speeds below 18 mph should an unavoidable collision be sensed by the vehicle. The system is also able to accelerate the vehicle automatically should it detect an imminent rear end collision providing the vehicle sees a clear space ahead. In addition, the new Passat can be fitted with an automatic fatigue detection system that monitors the driver’s inputs and automatically emits an audible and visual warning to recommend a break if required.

As with previous Passat models, the Electronic Stabilisation Programme (ESP) incorporates Trailer Stabilisation when a factory fitted towbar is specified. Promising enhanced dynamics, the new Passat can be specified with the acclaimed XDS electronic transverse differential for the first time. The system, which is standard on the Golf GTI, acts to reduce understeer and improve traction in slippery conditions making the new Passat feel more responsive as a result.

Other new optional convenience systems include an innovative boot opening system for the saloon model: on vehicles specified with keyless entry, so long as you’re carrying the key fob on your person a simple foot motion at the back of the car is enough to activate sensors that open the boot automatically – a useful function when your hands are full.

Both the saloon and Estate models are due to go on sale in the UK around the middle of October at which time pricing and specification details will be announced. First customer deliveries will take place in early January 2011.

With a claimed average of 68.9mpg and emissions of just 109g/km, the same as the Peugeot 508 1.6HDI e-drive. It has the familiar 1.6-litre turbo-diesel engine, producing 105PS and a six-speed manual transmission. The new Bluemotion is also available in estate form, providing 65.7mpg and pumping out 113g/km CO2. Features include stop-start, aerodynamic tweaks, lower suspension and low rolling-resistance rubber.

Highline model replaces SE for both saloon and estate. Additional equipment over SE included RNS 315 touchscreen satellite navigation unit, front and rear parking sensors, 2Zone climate control and stylish 17-inch ‘Sao Paolo’ alloy wheels. Together, they add £1,680-worth of value, yet the Passat Highline commands a premium of just £500 over the SE, with prices starting at £20,970 (RRP OTR) for the 1.4-litre TSI 122 PS.

The RNS 315 touchscreen satellite navigation system, previously a £750 option, includes a full-colour screen and traffic monitoring. As with all media systems in the Passat, it also features a multi-device interface, to allow connection of MP3 players and iPods (there is also a built-in Bluetooth music streaming facility, for those who prefer wireless links).

Front and rear parking sensors, previously £430, offer both an audible and visual guide (via the screen of the RNS 315), and also mean that Volkswagen’s Park Assist system, which allows the Passat to park itself in spaces parallel or perpendicular to the road, is now available as a great-value £195 option.

A 2Zone climate control system (worth £500) allows precise control of the temperature of each side of the cabin, down to half-degree increments. The driver and front seat passenger simply select the desired temperatures and the system automatically regulates the heating, air conditioning and air flow to achieve these.

The Passat Highline and Passat Estate Highline are available with a range of engines including 1.4-litre TSI 122 PS and 1.8-litre TSI 160 PS petrols, and 1.6-litre TDI 105 PS and 2.0-litre TDI 140 PS diesels. Gearboxes include five- and six-speed manuals and six- and seven-speed DSG units. The Passat Highline can be ordered from Volkswagen Retailers now, with some vehicles in stock for immediate delivery. The Passat range starts at £20,970 on the road.

The R-Line trim brings a bespoke bodykit. At the front, the bumper includes fog lights with cornering function, while 15mm lower sports suspension, side skirts and distinctive rear bumper and 18-inch ‘Kansas’ alloy wheels, wrapped in low-profile 235/40 tyres and a bootlid spoiler complete the look. Chrome trim on the bumpers and window surrounds is offset by dark-tinted rear windows, while standard bi-xenon headlights with LED daytime running lights and LED taillights help the R-Line to stand out, day and night.

The Passat R-Line’s equipment is based on the Passat S, and includes Bluetooth, USB and iPod connectivity, DAB digital radio and a leather-trimmed multifunction steering wheel (with gearshift paddles on DSG models).

The Passat R-Line is now open for ordering, with the first deliveries expected in June. The R-Line bodykit (bumpers, side skirts and spoiler) is also available for the Passat Highline and Sport, at £900 RRP including fitting.

The Executive sits above the entry level S and BlueMotion models in the Passat range, and comes with a comprehensive standard specification. They replace the Highline, Sport and R-Line trims in the line-up.

On the outside, new 17-inch ‘Michigan’ alloy wheels (a full-size alloy spare is also included) are complemented by exterior chrome trim, along with matt black roof rails on the Estate. Inside, the S’s standard DAB radio, MDI multi-device interface with USB and iPhone cables and Bluetooth connectivity are added to with Volkswagen’s RNS 315 touchscreen satellite navigation system. The leather-trimmed multifunction wheel and gear lever are enhanced by Vienna leather upholstery, including heated front seats, and electric adjustment for the driver’s seat.

Standard 2Zone climate control helps to keep the cabin at the perfect temperature for both driver and front passenger, while automatic lights and wipers ensure vision is optimised at all times, as does the auto-dimming interior rear-view mirror. Cruise control is also fitted, along with front and rear parking sensors, with both audible output and optical display.

In total, the Passat Executive comes with over £1,700-worth of equipment versus the Highline model that it replaces, for a premium of just £200, meaning on the road prices start from £20,235. The Executive Style builds on the Executive, but as the name suggests, it comes with a more distinctive look. Hunkered down on 15 mm lower sports suspension, the Executive Style comes with 18-inch ‘Kansas’ alloy wheels, bi-xenon headlights, front fog lights, and tinted rear glass together worth more than £2,000 for just £995 over the Executive.

The American spec Vollswagen Passat for 2014 has reverted to a lever operated parking brake system instead of electric parking brakes.

Air Ride suspension kit for Passat B7 made available by AirREX at £3,332.50 + VAT. www.airrexuk.co.uk

Buy a used Volkswagen Passat from £9,881