The dCi 85 and dCi 105 engines have been joined by the dCi 90 and the particulate filter-equipped dCi 110. Every one of these engines emits less than 120g of CO2/km, while the new dCi 130 profits from the dCi range's most advanced technology in terms of combustion and turbocharging to return CO2 emissions of just 135g/km.

Depending on market, the petrol range will comprise the 1.6 16V 100hp and 110hp engines, as well as the 2.0 16V 140hp and the TCe 180. The 2.0 16V 140 will be available from launch with a six-speed manual gearbox, while continuously variable transmission will be introduced with this powerplant at a later date. Renault's latest petrol engine, the TCe 130 will be added to the catalogue in the spring of 2009.

GT Line is an option pack available on Mégane Dynamique versions. They feature a specific chassis and are powered by the Mégane’s core-range of economical and ecological engines. GT is available with the 2.0 TCe 180 and 2.0 dCi 160 powerplants and combines sporty exterior and interior details with a specially-tuned chassis which takes its inspiration from Mégane Renaultsport 250

Priced from £10,995. Five-door Hatch available to order from July 2010, replacing the outgoing Extreme trim level, in either 1.6 100 petrol or 1.5 dCi 90 FAP diesel guise. Both drive through five-speed manual gearboxes.

Generation 1.6 100 available for a limited time to retail cash buyers at £10,995 on-the-road, a full £3,000 less than the recommended retail price. Outside of the offer, at £13,995 and £15,755 respectively, both models are still £860 cheaper than their predecessors. Among their core features are 4x15W radio CD with fingertip remote controls and aux input, air conditioning, cruise control, electric door mirrors and front windows, ESC, hands free keycard and speed limiter.

It has undergone a number of small styling changes to freshen up the model’s original lines. The front end has a more modern feel, while LED daytime running lights provide a distinctive new lighting signature. The bumper features a gloss black finish with chrome highlights, and the selection of wheels has been entirely revised. The sum of these modifications mirrors the attention that has been paid to quality, an area which Renault sees as a priority.

Meanwhile, the cabin comes with new interior trims, including a two-tone leather pack available in a choice of two finishes in the UK. The personality of the specific GT-Line finishes has also been enhanced inside and out thanks to specific ‘boomerang’-shaped LED lights, visible red upholstery stitching and a sports steering wheel incorporating thumb rests, plus Renault Sport-badged door sill guards and dashboard trim strip, serving as a reminder that it belongs to the Renaultsport family. Last but not least, the list of body colours available for Mégane 2012 has been extended with the addition of Azzurro Blue and Arctic White.

On the road prices for the Mégane Knight Edition Hatch start at £17,095, the Coupé at £17,595, while the Sport Tourer kicks off at just £17,895. All models qualify for Renault’s 4+ package: four-year warranty, four-year free servicing, four-year AA roadside cover and four-year finance.

The efficient and economical dCi 110 Stop & Start is the best-selling of all the Renault engines. It produces more torque (now 260 NM (+20NM), has lower CO2 emissions and improved fuel consumption (80.7mpg). This is all achieved by utilising the very latest engine technology – much of which comes from Renault's Formula 1 experience and expertise, and is unprecedented at this level.

Sharing the current Renault 'family' look, on sale in the UK from March 2014. The changes ensure greater unity between the front ends of Mégane Hatchback, Sport Tourer and Coupé which feature the same bumper and bonnet, although each version maintains its own distinctive identity. They are also equipped with new elliptical headlights.

The new styling identity has been carried over to the line-up’s sporting models, too. Mégane Renaultsport and GT Line both boast an even more dynamic stance and a new front-end design, as well as new headlights with gloss black backgrounds.

Facelifted Mégane available to order from 2nd December 2013, priced from £16,745. The Mégane Coupé-Cabriolet range is unaffected by the changes.

'Limited' series of specials announced with panoramic sunroof, extra tinted windows and tailgate. Around £1,000 worth of extra equipment, for half the £500 extra price, when compared to the already well-equipped Dynamique TomTom varieties on which they are based.

'Limited' is available on the Mégane range of Hatch, Sport Tourer and Coupé models, and Scénic range, apart from XMOD.

Prices for Mégane Limited start at £18,250 on the road, with Scénic Limited from £19,865. Ordering is open now, with first deliveries in September.

Optional extras for the Limited include 17-inch ‘Pragma’ alloy wheels for £310 and R-Link (Scenic £200, £300 on Megane with upgraded Western European mapping).

The after sales package offers a four year/100,000 miles warranty and roadside assistance. 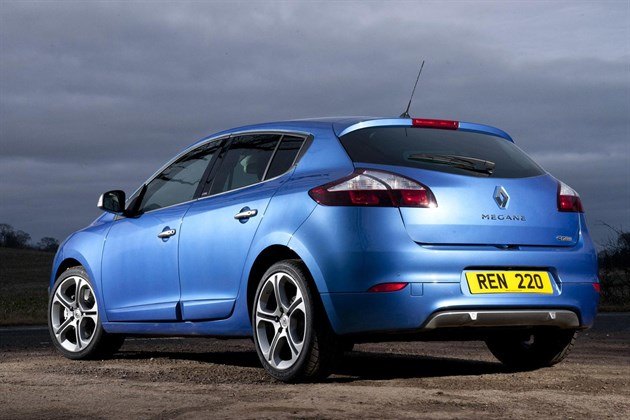 Based on the Megane GT Line TomTom, they are powered by a 220hp version of the Renaultsport 2.0-litre turbo engine and featuring a Renaultsport-engineered chassis and 18-inch ‘Serdard’ alloy wheels fitted with 225/40R18 Dunlop Sport Maxx TT tyre plus stiffer springs and dampers and larger front brake discs from Renaultsport.

The 2.0-litre 16-valve turbocharged engine develops its 220hp at 4,750 rpm and drives the front wheels through a six-speed manual transmission. With 340Nm torque at 2,400 rpm at the driver’s disposal, the GT 220 can accelerate from 0-60 mph in 7.3 seconds on the way to a top speed of 149 mph. Yet with Renault’s Stop & Start technology as standard, the GT 220 is also economical and efficient, returning 38.7 mpg on the combined test cycle, with CO 2 emissions of 169 g/km. (All these figures are worse than the 280PS SEAT Leaon ST Cupra.)

The Renaultsport-tuned chassis on the GT 220 includes specific front and rear dampers that use the calibration and valving based on those used on Mégane Renaultsport and the same rear bump stops. The steering calibration differs to that of the mainstream Mégane to take into account the GT 220 versions' specific tyres and chassis settings.

Appearance, specification and colour choices for the GT 220 mirror what is available with the GT Line models, including the option of bespoke Malta Blue paintwork with anthracite grey and polished detailing. The door mirror housings are in dark chrome shell. At the front there is a special GT bumper design, with a reshaped central air intake and an integral gloss black cross bar that carries the number plate. At the rear, the bumper has a lower section finished in body colour, which incorporates an anthracite-coloured aerodynamic diffuser. In the cabin the Renaultsport influence is evident in the sports seats and upholstery, the thick leather-rimmed steering wheel with thumb indents and stitching detail, the analogue dials and aluminium pedals. The interior door handle pulls, outer air vent surrounds and the dashboard have a polished carbon finish.

The GT 220, like every Renault, provides the peace of mind of the 4+ warranty and assistance package. The car is protected with a four year or 100,000 miles warranty (first two years unlimited mileage). In the event of a breakdown, Renault provides emergency roadside repairs or towing to the nearest dealer 24/7 every day of the year, plus three years’ European cover. There is also a three-year paint warranty and 12 years’ cover against corrosion.