The Mercedes-Benz C-Class was described by MB as having a "clear yet emotional design and high-class interior. Many other innovations and interior touches underscore the Saloon's comfort and refined sportiness. In all, the perceived quality of the new C-Class feels like an upgrade to a higher class of travel”.

The C-Class has grown to take account of people's increasing average height. With an 80-mm increase in the wheelbase (2840mm) compared with the previous model, the vehicle is 95 mm longer (4686mm and 40mm wider (1810mm). The boot is bigger at 480 litres and there's more rear legroom.

Other wheel and tyre sizes are:

The interior has an all new centre console featuring flowing lines. In automatic vehicles, a large one-piece centre console panel performs an elegant sweep from the centre air vents to the armrest. On vehicles with manual transmission, the centre console is slightly steeper and features two separate trim elements in order to create ample space for ergonomic operation of the shift lever.

The innovative touchpad in the handrest over the Controller on the centre tunnel marks a further evolutionary step developed in-house at Mercedes-Benz. As on a smartphone, this provides for very simple and intuitive operation of all the head-unit functions using finger gestures. The touchpad also permits letters, numbers and special characters to be entered in handwriting - in any language. The user receives clear haptic feedback when operating the touchpad's control surface, which is highly conducive to genuine intuitive use.

Three engine variants are available at the market launch - a diesel in the guise of the C 220 BlueTEC and the two petrol models, C 180 and C 200:

Soon after the launch, Mercedes-Benz expanded the range of engines including a new, Renualt derived 1.6 small diesel engine. Reduced weight, compact design and low fuel consumption are among its special merits. Depending on its configuration, the single-stage supercharged four-cylinder engine generates 115hp or 136hp from a cubic capacity of 1,598cc and delivers 280Nm or 320Nm of torque. That is a significant difference from the Renault/Nissan applications of this engine that are turbocharged in the case of the DCI 130 and twin-turbo in the forthcoming DCI 160.

In addition to this new small diesel engine, an advanced version of the proven 2.1-litre four-cylinder diesel engine became available in several output variants. The diesel engines covered an output range from 115hp to 204hp. The C 220 BlueTEC was also available with an output of 170hp.

As in the S and E-Class, Mercedes-Benz additionally offered a diesel engine combined with a hybrid module. The C 300 BlueTEC HYBRID with four-cylinder diesel engine and a compact electric motor generates an output of 204 + 27hp and runs on only 72.4mpg in NEDC combined mode (provisional figure). A further particularly economical hybrid model arrived later with state-of-the-art plug-in technology.

The suspension on the new C-Class is an all-new development. It provides for nimble and agile handling that makes driving a great pleasure on winding roads while also offering the highest standard of ride comfort in the segment.

The new C-Class Saloon is fitted as standard with steel suspension. Three DIRECT CONTROL suspensions with selective damping system are available in conjunction with this suspension:

Alternatively, the new C-Class is the first vehicle in its segment that can be fitted with an air suspension (AIRMATIC) on the front and rear axles (HIGHLY RECOMMENDED). Thanks to electronically controlled, continuous variable damping at the front and rear, it offers outstanding road roar and tyre vibration characteristics even with the vehicle loaded. The driver can use the AGILITY SELECT switch to choose between the various characteristics: "Comfort", "ECO", "Sport" and "Sport+". The additional "Individual" option enables drivers to configure their vehicle according to their own wishes. AIRMATIC also features all-round self-levelling for optimum ride comfort even when the vehicle is loaded.

A completely new multimedia generation offers intuitive operation in the new C-Class, featuring elaborate animations and visual effects, which present all the functions in a clear and highly attractive manner. The new C-Class is also equipped with the unique Frontbass system. This avant-garde acoustic systems uses the space within the cross-member and side member in the body structure as a resonance chamber for the bass speakers to conjure up a listening experience almost on a par with a concert hall. 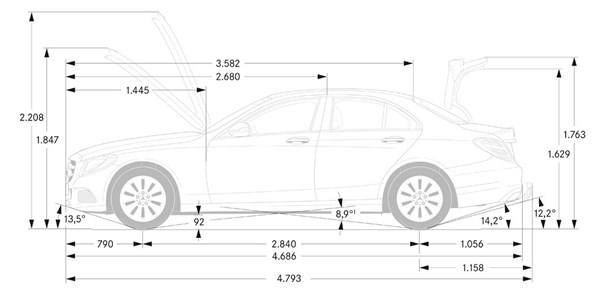 The new C63 AMG adds an all-new 4.0-litre biturbo engine to endow it with phenomenal performance while unique, three-stage adjustable dampers and a bespoke steering setup allow it to retain the agility that made the model it replaces the most popular AMG ever created.

The C63 AMG produces 476PS and, in C63 S AMG guise, 510PS. It’s nearly a third more efficient than the engine it replaces yet, in ‘S’ form, produces more power and emits less CO2– now from 192 g/km. A heavily revised version of the AMG SPEEDSHIFT MCT 7-speed transmission features on the C63 AMG - now with significantly quicker shift times to improve responses. The C 63 S AMG accelerates from rest to 62 mph in 4.0 seconds and is limited to a maximum top speed of 155 mph. The car weighs 1,715kg.

Front bumpers redesigned for all lines while the rear bumper on the saloon and Estate has a new lower section, geometry, trim and tailpipe trim vary according to the selected equipment and engine variant.

The colour spectrum has been broadened by the addition of Mojave silver metallic and emerald green metallic.

The centre console is characterised by an elegant flowing trim. This is available in open-pore brown walnut or open-pore anthracite oak. The 3D real wood veneer in the centre console combines a hand-crafted character with a modern feel. Magma grey/black are new interiors, plus saddle brown for the AMG Line interior.

The Multicontour Seat package is new to the C-Class. With this package, the side bolsters and lumbar support can be individually adjusted by means of an electrically driven pneumatic pump. A massage effect in the lumbar area is provided by air chambers which are inflated and deflated in a pulsing or wave-like motion when the function is activated. The seat’s pneumatic functions are operated via the multimedia system.

The basic model features a classic two-tube instrument cluster. Between the tubes there is a 5.5-inch colour display. The fully digital instrument display is available as an option. The screen has a 12.3-inch diagonal and offers high resolution.

The multimedia screen above the centre console is also available in two sizes. In combination with Audio 20 it has a 7-inch screen diagonal and a resolution of 960 x 540 pixels. Here too, the display style is “Classic”.

The new C-Class comes with extended Active Brake Assist as standard. Depending on the situation, this can help to mitigate the consequences of rear-end collisions with slow-moving, stopping or stationary vehicles ahead, and even with crossing pedestrians and cyclists, or prevent them altogether.

For the first time the C 63 now comes with an AMG SPEEDSHIFT MCT 9G transmission (previously 7G), which has been specially designed for shorter shift times. A wet start-off clutch continues to replace the torque converter, ultimately saving weight and optimising throttle response.

For £2595 customers can opt for the Premium Plus equipment line which includes Burmester surround sound system, panoramic sunroof (not available on Cabriolet), 360° camera and Keyless-Go Comfort package.