Excellent equipment across the range, great fun to drive regardless of the engine, sport version is huge...
Hyundai i20

Snapped rear coil spring on Renault Clio
You're caught between a rock and a hard place and it simply isn't worth a battle. If you paid the full price for the springs and obtained the snapped remains for checking, your costs for a technical report would be far greater than you could hope to recover in court. So my advice is to take the expedient route and take the 60 per cent offer from Renault, which leaves you paying about £120.
Answered by Honest John
Why does my car's air con smell so bad?
Very simple. Run it at maximum temperature for 15 minutes. The smell is coming from bacteria that has grown on condensation in the ducting. To get rid of the smell you need to dry out the condensation and the heat should also kill the bacteria. Always a good idea to run a/c on max temperature for a minute or two at the end of a journey in order to evaporate off condensation in the ducting.
Answered by Honest John
Renault Clio III problems
The clutch problem is likely to be either master cylinder or slave cylinder (probably master cylinder). Poor starting of a diesel in cold weather is either a battery problem, a glow plug problem, or lumps of emulsified biodiesel blocking the fuel filter.
Answered by Honest John
Buying a car for my son?
Problems here: http://www.honestjohn.co.uk/carbycar/renault/clio-iii-2-2009/?section=good/ The best small diesel is probably the Mazda 2 1.5 Skyactiv D, but it's quite expensive: http://www.honestjohn.co.uk/road-tests/mazda/mazda-2-15-skyactiv-d-2015-road-test//
Answered by Honest John
More Questions

Apparently the wiper arms rub against the trailing edge of the bonnet when pulled out to clean the windscreen by hand and take the paint off the area they rub.

Transmission of three year old Clio Sport failed at 38k miles. Renault offered to pay dealer charge of £480 to remove and inspect transmission, plus 50% of £2,800 cost of replacement box if box found to be faulty.

(Not clear if this was a 2005-2009 Clio III or a 2009-2013 Clio III) Report of leaking sunroof leading to smoke coming from the steering column and horn sounding whilst driving. The airbag and horn needed replacing (£281) and a Renault dealer wanted £400 to redo the sunroof.

Report of erratic operation of drivers and passenger's electric windows in 2010 Renault Clio Sport Tourer. Do not open/close smoothly and sometimes get stuck open. Owner beleives can be fixed by replacing the control module (eg www.renaultwindow.co.uk). Might be solves by loweting the windows and appluoing silicone grease to the insides of the window channels.

Renault revealed the 2009 face of its Clio hatchback and estate. In response to customer demand, Clio 2009 features renewed styling, a line-up of three performance versions and Carminat TomTom, the first fully-integrated GPS navigation system to market at a price of less than £500.

New 98g/km CO2 Clio dCi 86 Renault eco² announced. This represents a 17g/km reduction in CO2 emissions (15% overall) compared to current engine, achieved through series of aerodynamic, engine and tyre improvements. Combined fuel economy raised to 76.3 mpg and drag co-efficient reduced from 0.725 to 0.69 CdA. Unlike rivals, the new models will cost the same as previous 115g/km version. Available to order in France from 9th February and later 2010 in UK. Three or five doors, the new versions offer a theoretical range of 923 miles between fill-ups. No impact on the car’s performance.

New Clio ‘S’ designed to give sport-look and accessible style with affordable prices and frugal engines, priced from £11,209 to £13,458 on-the-road. Available to order January 2010 and in showrooms from March 2010.

Resurrecting Clio S formula from the early 90s, the new three-door versions hark back to the original through their trademark white 16-inch ‘Polar’ alloy wheels. Among the other cosmetic changes, are a white front bumper insert and white ‘GT’ rear spoiler, while to the sides and roof, some optional slightly less subtle white racing stripes catch the eye with an ‘S’ incorporated into each band. Completing the package, are extra tinted rear windows and tailgate for a truly contemporary look. Interior includes ‘S’ embossed upholstery, leather steering wheel and striking white centre console, dashboard inserts and instrument dials.

Simplified, easier to understand range for all Renault models from 4th January 2010 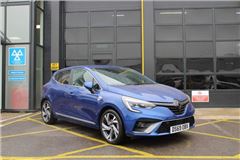 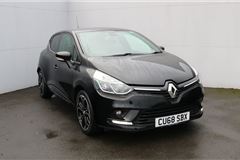 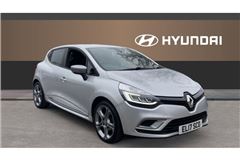