There is no doubt that Renault has turned the Clio into a classy little car. You almost expect to see a Jimmy Choo shopping bag on the back seat along with a bunch of other designer labels.

It's very good looking. Better than the 207, in my eyes. And since that's its main competition it at first seems to have the job sewn up.

Nice colour range, too. It looks particularly good in dark metallic blue with alloys. And the solid Capsicum red that mine came in is a really rich red (always the best colour to photograph).

Of course, it is up against the much cheaper and even better looking Grande Punto as well. But for strange, snobbish, style reasons, many Brits who would be happy with a Renault or a Peugeot won't be seen dead in a FIAT.

Looks great on the outside and isn't too shabby on the inside either. Hybrid engine is cheap to run and...
SEAT Ibiza

What's the best car to replace my ageing Renault Clio?
I would recommend the Ford Puma and SEAT Arona. Both are based on small hatchbacks (Fiesta and Ibiza) and will be similar in size to your Clio. The Puma and Arona are available with excellent 1.0-litre petrol engines, but being crossover-styled cars they have a higher driving position and a larger boot. The Puma has the biggest boot of the two with 456 litres, which is around 50 more than the Arona. The Puma also had a useful storage box in the boot called a 'megabox' which lets you store things like boots or golf clubs. It also has a drainage plug, which means you can hose it out.

Answered by Dan Powell
I need to get a reliable car urgently. Do you advise a PCP?
Unfortunately, as you're finding, an older Clio is a recipe for headaches. A PCP isn't a bad idea – a little Kia Picanto or Suzuki Swift will be very affordable, cheap to run and should prove to be much more reliable than your current cars.

Answered by Andrew Brady
Would roof bars add much value when selling my 2006 Renault Clio?
I doubt it. You'd be best removing them - but even then, they're unlikely to be worth a great deal.

Answered by Andrew Brady
Do I need anything else replaced when a cam belt is changed?
Needs timing belt, tensioner, waterpump and alternator belt replacing. No point in just replacing the belt because if any of the other three fail they will take the belt off and the engine will suffer the same damage as if the belt failed.
Answered by Honest John
More Questions

Inside (the Dynamique) you get a nice steering wheel with height and reach adjustment, a driver's seat that comes back to the position you set it after someone else clambers into the back, enough head, leg and hiproom in the back for three normal sized people and curiously angled instruments, yet after a first drive you get used to them.

Ride quality is a bit clonky over suburban surface imperfections, though far better out on the open road. The ‘variable' power steering isn't very inspiring.

A few minor irritations are that on the 3-door the door pull is too far forward to give decent leverage for shutting the door, rear 3/4 vision is badly obscured by the door pillar so you have to trust the big, useful mirrors, the centre rear belt comes out of the roof so you have to clip it together before using it.

Rooting around trying to zero the trip I found that ‘my' Dynamique was fitted with optional cruise control and speed limiter. This worked quite well on a horrible trip down the M4 in the rain via Gatso alley, which was fortunate because the front ‘Sport' seat squabs lack thigh support for someone my size and shape.

As a result of bad logistical planning, I had to make almost exactly the same journey the next day. But this time I had it sussed. M4, A303, A34, M4, A419, A417. I actually got back the 120 miles or so in one hour forty minutes without exceeding any speed limits, so that says quite a lot about the car and the cruise control. Fuel economy wasn't so brilliant. Just 32.49mpg over 310 miles, which is way short of the 42.8mpg official combined figure. However there may have been a disparity between my brim and the brim the car came with.

I found myself liking the Clio, though. It is undoubtedly the most chic small hatchback around. The 207 is much more fun to drive, but doesn't quite have the Clio's classy good looks. I liked the fit and finish of the trim: no cheap cost-cuttings there, and rather better than the hard plastics of the Leon I drove last week. I was trying to compare like for like against my favourite 207, the 1.4, but the obvious choice among the Clios has to be the 64mpg, 117g/km CO2, £50 a year VED 1.5 dCi 86. A little bit expensive at £11,840, but with enough ‘big car feel' for a high mileage driver to use as an economical business car.

Report of injection pump of 2007 1.5 diesel breaking up and sending shards into the injectors. Definitely not caused by incorrectly filling with petrol. The reason the tank had to be flushed out is that once an injector pump sends shards of metal into the common rail, it can flow back into the tank and the shards can be so small they are not caught by the fule filter so go on to damage the fragile injectors. Quoted £3,635 + VAT for repairs. Car had full Renault service history and Renault provided goodwill of 55%, dealer 10%, total 65%.

Report of leaking sunroof leading to smoke coming from the steering column and horn sounding whilst driving. The airbag and horn needed replacing (£281) and a Renault dealer wanted £400 to redo the sunroof.

Report of sunroof of 2006 Renault Clio failing to open.

Dynamique S 138 launched at £12,180. Has 2.0 VVT 138 hp petrol engine. Offers refinement and comfort of a large car in a supermini sized package without compromising on power. Launched as three-door only, but new 138hp engine available as a five-door Clio in Privilège and Initiale trims, as well as a Clio 138hp auto, in the first half of 2007.

Renaultsport Clio 197 Cup launched. Offers same chassis set-up as limited-edition 197 F1 Team R27 with its reduced ride height of 7mm and stiffer springs and dampers. White available as an option for the first time. Renaultsport wheels in anthracite are standard whilst satin black Speedline wheels are optional. Air conditioning is moved to the options list for those who want to reduce the car’s weight as much as is possible. Lightweight Renaultsport Recaro seats are also available as an option.

Extreme is now the entry-level point for Clio three-door. It gains front fog lights and extra-tinted windows as standard. Extreme is available with a choice of two engines, the 1.2 16V 75 and dCi 86, priced at £9,495 and £11,145 respectively.

Entry-level point for the Clio five-door, Expression now benefits from cruise control, speed limiter and automatic headlights and wipers. Expression is available in a choice of four engines, the 1.2 16V 75, 1.2 TCe Turbo 100, 1.6 VVT Automatic and the dCi 86. Prices start from £10,365, rising to £12,565 for the five-door whilst the Sport Tourer starts from £11,215

Dynamique S which incorporates a revised interior with stunning features which reflect its sporty exterior. ,A stylish zinc grey centre console, dashboard inserts and air vent surrounds, white instrument dials, 16” ‘Lyria’ alloy wheels, part leather upholstery and carpet mats are now additional standard features to an already long list of equipment. Dynamique S has a choice of four engines, 1.2 TCe Turbo 100, 2.0 VVT 138 six-speed, dCi 86 and dCi 106 six-speed. Prices range from £11,980 to £13,680 for the three-door and £12,580 to £14,280 for the five-door.

Initiale is available in five-door only and already includes an impressive list of standard equipment including leather upholstery. Clio Initiale is priced at £15,700 for the 1.6 VVT 111 Automatic and £16,050 for the dCi 106 six-speed. 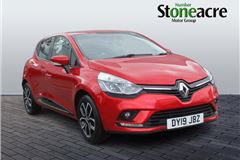 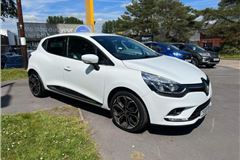 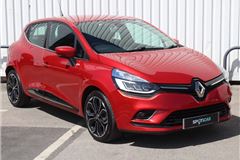