Looking for a Caterham Seven (2015 on)?
Register your interest for later or request to be contacted by a dealer to talk through your options now.

Revised model range for 2015. The essence of an enthusiast's sports car: light in weight, incredibly responsive and quick at the expense of everything else. Great fun for track days, sprints, speed hill climbs and other events.

Still a very basic, noisy, open car. You have to be an enthusiastic masochist to drive one any distance on the road.

The Caterham 7 is derived from the Lotus 7, itself developed from Colin Chapman's 1953-1956 Lotus Vi clubman's sports racing car.

It was succeeded by the Super Seven S2 and S3 qith increasingly powerful Ford 3 bearing and 5 bearing engines. A 1,340cc 3-bearing Ford engine boired out to 1,475cc with a Holbay head and twin Webder DCOEs would typically make 130PS at the wheels. It was fantastically successful and the car of choicew for clubman formula racing, springs and speed hill climbs in the 1960s.

The fibreglass bodied Lotus 7S4 succeeded the 7 briefly from 1970 to 1973, but was never as successful.

The original Super Seven S3 was subsequently revived by Caterham Cars and progressively improved over the years.

What do owners think of the Caterham Seven (2015)? Check out our Owners' Reviews from people who live with the car day in, day out.

Looking for a Caterham Seven (2015 on)?
Register your interest for later or request to be contacted by a dealer to talk through your options now. Everything you need for driving fun.

Nothing you don't need. 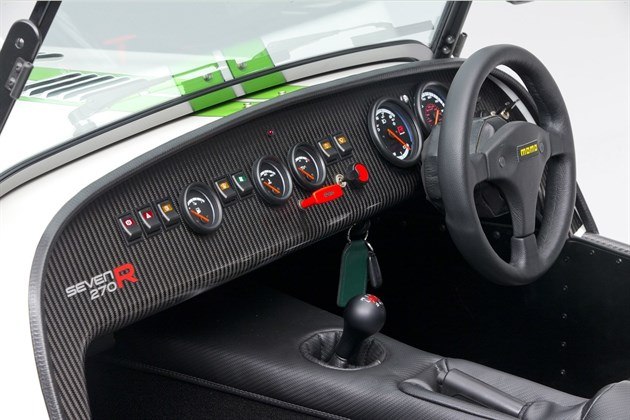