As saloon, with the advantages of a station wagon body.

Excellent to drive. Wide range of petrol and diesel engines (as well as the electric BMW i4). We like... 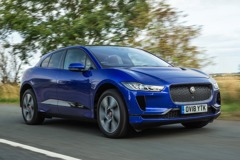 The most enjoyable car of its type to drive, lots of standard equipment provided, good driving range...

Does the engine need taken out to replace the DMF and timing chain in a BMW 5 Series 2.0d?
Either you have to take the engine out or the gearbox out. The DMF and clutch cannot be replaced any other way. But because the timing chain of the N47 2.0 diesel is at the back of the engine it is obviously more convenient to take the engine out to replace both chain, tensioners, DMF and clutch.
Answered by Honest John
Glass tail gate - what's wrong with it?
I guess moisture has got into the lock electrics or into the servo.
Answered by Honest John
Buying a used car suitable for winter driving
Cold weather tyres are far better than four-wheel drive on snow. But obviously a quattro on cold weather or all weather tyres will be better still.
Answered by Honest John
When should I sell my BMW 5 Series Touring?
Unpredictable. Take a look at: http://www.honestjohn.co.uk/carbycar/bmw/5-series-e60-2003/?section=bad and http://www.honestjohn.co.uk/carbycar/bmw/5-series-touring-e61-2004/?section=bad I would be starting to get nervous.
Answered by Honest John
More Questions

Check PAS fluid level regularly. Steering rack may leak fluid unnoticed out of end seal and into track rod end gaiter. Seems to be a Europe-wide shortage of parts to correct this.

Self levelling rear suspension prone to failurre after around 4 years and/or around 80k miles.

Wiring connection between car and tailgate fails. Best fixed independently because BMW dealers have been known to quote £2,000 to repair it.

Another case of wiring problems to the reversing lights in the rear hatch becaude the cables supplying the power get crimped by the wire guide when the hatch is closed. (See above.)

E60/61 petrol models can develop electrical failure in three different areas simultaneously: fan blower in the cabin; mirror demisters and rear window demister. This can be solved by simply unclipping the 'Intelligent Battery Controller ' cable connected to the battery, then reconnecting. It's part of the problem listed above at 10-802012 and 31-8-2012.

Rear suspension arm balljoint failure on 120k mile E61 525i Touring leading to collapse of nearside rear suspension. From the photo it looks like a wear and tear problem that should have been picked up in the car's last MoT. May have been due to the weight of loads carried.

Fault with high pressure fuel pump of petrol models can lead to stalling without warning and does not show up on BMW diagnostics. This led to a voluntary recall on 26-10-2010 on 2007-2010 5-Series E60s and E61s in the USA so is an acknowledged fault, but no recall in the UK.

Another complaint of rear suspension arm balljoint failure, this on a 130k mile 2004 E61 530D Touring. This is becoming quite a serious safety issue and owners should report the failures to VOSA. However, very difficult to blam BMW for failures on what are now 10 year old cars. Owners shoud have the rtear suspension of their E61 Tourings independently inpected, especially if they are considering towing or carrying heavy loads.

Reader reported total electrical failure of his 2009 BMW 525D. Insurance Assessor's report: "The vehicle suffered an electrical failure of an unidentified module mounted in the vehicle's boot. Thius caused an electrical short circuit, causing the earth wire in the body wiring loom to heat up. This has melted the plastic insulation of the earth wire and adjacent wires." Total repair cost estimated at £10,414.28. (See E60 entry 31-8-2012 for an hilarious account (some swearing) of a ridiculous design deficiency of E60/E61 5-Series whereby the battery is sited directly beneath the one-way rear cabin vent flap so if the one way flap fails water is forced through it onto the battery: http://www.liveleak.com/view?i=af8_1346299893. There was a recall: R/2012/039: http://www.vosa.gov.uk/vosa/apps/recalls/searches/expand.asp?uniqueID=39ADAE6B50B53351802579CA0037A982&freeText=Blank&tx=/)

Selection of 17” and 18” alloy wheels are available as options, all featuring run-flat technology. This allows a car with a punctured tyre to be driven fully laden for at least 90 miles at speeds of 50 mph, removing the need for hard shoulder tyre changes. Run-flat tyres also have the added benefit of negating the need for a spare wheel, thereby providing extra storage space and reducing weight.

535d Touring starts from £38,600 in UK from October 2004. EU4 compliant. 272bhp and 560Nm of torque from sequential twin turbo 3.0 six with small turbo giving maximum performance from idle to low engine speeds – 500Nm of torque at 1,500rpm, then, as the revs build, a larger turbo helps to further compress the air for a second, seamless boost of power. The result is a continuous surge of acceleration making for a zero to 62mph time of 6.5 seconds yet a combined fuel consumption 35.3mpg. 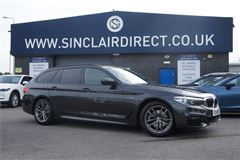