MG HS At A Glance

Honest John Overall Rating
Representing excellent value for money, the MG HS is a spacious SUV that should be cheap to run. It's just a shame that it's not available with a diesel engine.

Disappointing petrol engine. Not as practical as you'd expect.

The MG HS is an affordable family SUV which doesn't feel like a budget option. It's cheaper than a Skoda Karoq or Nissan Qashqai, despite being closer in size to a Ford Kuga or Honda CR-V. Read our full MG HS review to find out if you should spend your money on this cut-price SUV.

It's fair to say that MG has had a rocky start under Chinese ownership, with models like the MG 6 and MG GS falling wide of the mark. It's finally starting to make a name for itself as an appealing budget brand, though, with generous levels of standard equipment as well as an impressive seven-year warranty.

MG's line-up today consists of the MG 3 hatchback, the MG ZS small SUV and the electric-only MG 5 EV. The biggest car in the line-up is this, the MG HS. As we touched upon above, rivals range from popular models like the Kia Sportage and Peugeot 3008, to slightly bigger SUVs like the Toyota RAV4 and Citroen C5 Aircross.

You can't buy the MG HS with a diesel engine, which is quite a statement in itself. Instead, buyers get the choice of an underwhelming 1.5-litre petrol (officially it packs 162PS but it couldn't pull a skin off a rice pudding) or a punchier plug-in hybrid.

By combining the petrol engine with an electric motor, the MG HS PHEV provides surprisingly rapid acceleration. It's the 32-mile electric range that most buyers will be more interested in, though, while its sub-50g/km CO2 figure will make it appealing to company car drivers.

Inside, the MG HS has a spacious interior with a high seating position. It doesn't feel quite as posh as a Volkswagen Tiguan, but it's a lot better finished than the old MG GS. There were initially three trim levels available in the MG HS range: Explore, Excite and Exclusive. This has now been slimmed down to just the two, Excite and Exclusive. All are well equipped for the money, with the mid-spec MG HS Excite featuring navigation, a reversing camera and 18-inch alloy wheels.

MG HS prices start from less than £21,500, which is very competitive for an SUV of this size. Even the plug-in hybrid is relatively affordable, priced from around £32,500. When you consider how much physical car you get for the money, that's a modern day SUV bargain. And, unlike some MG models of old, the MG HS doesn't represent too much of a compromise, either.

Looking for a second opinion? Take a read of heycar's MG HS review.

What do owners think of the MG HS? Check out our Owners' Reviews from people who live with the car day in, day out. 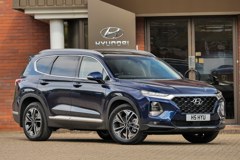 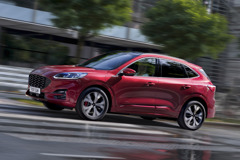 Good looking family SUV comes with a decent amount of standard kit and is keenly priced. The plug-in... Stylish inside and out with a well-finished cabin. Well equipped as standard. Good range of engines....

On the inside of an MG HS

Interior Rating
The MG HS has a spacious interior that feels well made, although its infotainment system is far from top of the class. Despite the SUV's relatively large dimensions, the MG HS has a surprisingly small boot.

While the MG HS is actually fairly large compared to rivals, its boot can only shift up to 463 litres of luggage (448 litres in the MG HS Plug-in Hybrid). That's less than a Nissan Qashqai or SEAT Ateca, but it's an easy boot to access, and there's a handy hidden storage area underneath the floor. You can also drop the rear seats if you need more space, although they don't fold entirely flat.

Boot aside, the MG HS has a spacious cabin. You sit surprisingly high up, giving a proper off-roader-like vibe. That's not great for headroom, particularly if you buy one with the panoramic sunroof, but it is good for drivers who wish to see over hedgerows.

There's plenty of room in the back, too, while reclining back rests mean it's easy to get comfortable. ISOFIX child seat mounting points are fitted to the outer rear seats, while wide-opening rear doors helps when you're wrestling with a child seat.

Even the most affordable models in the MG HS range feel posher than you'd expect for the price, with highlights including a perforated leather steering wheel and contrasting red stitching as standard. There are plenty of soft-touch finishes, while the MG HS feels like it'll generally stand up well to day-to-day family life.

The MG HS features a surprisingly big 10.1-inch infotainment screen, with Apple CarPlay and Android Auto on hand to provide access to your favourite apps from your mobile phone. We'd recommend looking for an MG HS Excite or Exclusive model for navigation and DAB radio – nice-to-have features, even if they're not particularly necessary.

While the media system in the MG HS might trump rivals in terms of size, it doesn't quite hit the spot in terms of useability. It's just a bit slow to respond and not as intuitive as you'd find in an infotainment system from a mainstream competitor.

Value for Money Rating
The MG HS represents excellent value for money. Not only does it undercut rivals in terms of list price, you can also save cash by looking for a pre-reg model. It's just a shame the petrol model isn't particularly frugal on fuel.

On-the-road prices start from £21,495 for a new MG HS Excite with the 1.5-litre petrol engine and manual gearbox, rising to £32,595 for a top-spec MG HS Plug-in Hybrid Exclusive.

The MG HS 1.5 petrol performs poorly in fuel economy tests, officially returning up to 37.2mpg with the manual gearbox and 36.2mpg with the auto. These are the kind of figures we'd expect to see from a petrol SUV 20 years ago – a SEAT Ateca 1.5 TSI will return up to 45.6mpg.

There's no diesel option, but the MG HS Plug-in Hybrid is a bit more efficient. While MG quotes 155.8mpg, this isn't very dependent on how regularly you charge it and the kind of journeys you cover. It can officially travel up to 32 miles on electric power alone – if you rarely travel further than this, the MG HS PHEV will be very efficient indeed.

Driving Rating
The MG HS is underwhelming to drive, with woolly steering and unsettled ride. The petrol engine is equally disappointing, but the plug-in hybrid model is rapid and should be cheap to run.

Forget about MG's sporting heritage, the HS lacks finesse in the handling department. The steering is just a little vague, while the ride comfort isn't really good enough to compensate for this. It patters over broken tarmac, while the weight of the plug-in hybrid model means you'll feel every little bump in the road. The Citroen C5 Aircross is a comfier choice, while the SEAT Ateca and Mazda CX-5 are more fun to drive.

It's easy to drive, though, while good visibility helps around town. Rear parking sensors and a reversing camera are standard on MG HS Excite and Exclusive models – both very useful gadgets when manouvering a relatively large family SUV in a tight car park.

The regular MG HS is powered by a 1.5-litre petrol engine. This is a four-cylinder turbocharged unit, producing 162PS and 250Nm of torque. It's available with a six-speed manual or seven-speed dual-clutch auto transmission.

You'd expect it to be quicker than smaller three-cylinder alternatives, but the relatively hefty dimensions of the MG HS mean it's not particularly rapid – accelerating to 62mph in 9.9 seconds.

There isn't a diesel MG HS on sale, but there is an alternative if you require punchier performance. The MG HS PHEV (plug-in hybrid) pairs a 1.5 petrol engine with an electric motor, producing a combined 258PS. This is noticeably quicker off the line, accelerating to 62mph from a standstill in 7.1 seconds.

All MG HS models are front-wheel drive so you'll have to look elsewhere if you wish to venture off road.

Every MG HS comes with a host of driver-assist features grouped under the 'MG Pilot' banner. These include an low-speed emergency braking system, named Active Emergency Braking, which can apply the brakes to prevent a crash at speeds below 12mph. As well as spotting other cars, this can also recognise pedestrians and cyclists.

Blind Spot Detection is also standard across the range, as well as Rear Cross Traffic Alert (which makes you aware of oncoming traffic when you're reversing out of a parking space or driveway).

When the MG HS was crash tested by Euro NCAP, it scored a five-star safety rating. That includes a 92 per cent score for adult occupants and 81 per cent for children. It was rated 64 per cent for its protection of vulnerable road users and 76 per cent for its safety assist features.

The petrol MG HS has an official braked towing capacity of up to 1750kg. The MG HS PHEV, meanwhile, is rated to tow up to 1500kg.

From launch, the MG HS was available in three trim levels: Explore, Excite and Exclusive.

A budget alternative to the Nissan Qashqai and Skoda Karoq, the MG HS is priced from £17,995 and is on sale now.

On the outside, MG says the HS has been designed to look 'purposeful and sporty', with the latest iteration of MG's grille at the front and twin tailpipes with an aluminium lower bumper at the rear.

The HS is powered by MG's 1.5-litre turbocharged petrol engine with 162PS paired with a six-speed manual or seven-speed DCT automatic transmission.

On sale now with customer deliveries starting in November, the HS joins the MG3, ZS and ZS EV in MG's range. It's also backed by MG's seven-year warranty.

Priced from £29,995, the MG HS Plug-in combines a 1.5-litre turbo petrol engine with a 90kW electric motor. It has an official CO2 output of 43g/km and can travel 32 miles under electric power.

Together the electric and petrol motors develop a combined power output of 258PS, giving the HS Plug-in the ability to accelerate from 0-60mph in 6.9 seconds. With power going to the front wheels, the HS Plug-in uses a six-speed automatic gearbox combined with a four-speed electronic drive unit.

Using a Type 2 fast charger, the MG HS Plug-in can be charged from zero to 100% in just three hours.

What does a MG HS cost? 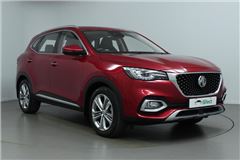 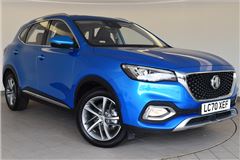 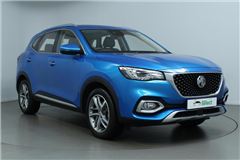